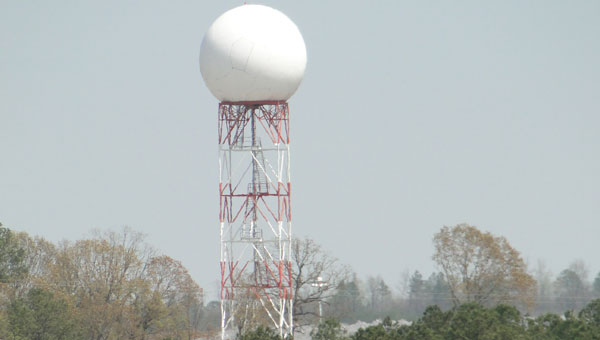 The Doppler radar in Calera was upgraded February 2012 with Dual-Polarization technology to improve
the accuracy and identification of precipitation and tornadoes. (contributed)

Does uncontrollable excitement come over you when erratic changes in weather behavior appear on the forecast? You’ve watched Twister for oh… say a gazillion times. Or, maybe, you have lilapsophobia, fear of tornadoes and hurricanes. If yes to either, you want to keep reading.

“The old school radar used in the 1940s in World War II just scanned around looking for targets,” Laws said. “Doppler gives a horizontal scan of the speed and direction of the target, you didn’t just see it you knew where it was going. Dual Polarization Radar adds a vertical scan of the target, taking away the guess work of size and shape of raindrops and other objects in the air. Once you’re able to identify what the radar is seeing, you’re able to make a lot more assumptions about weather activity.”

Comparing the horizontal and vertical scan is called Differential Reflectivity. Meteorologists can differentiate the targets as light or heavy precipitation or hail within a storm. They can pinpoint exactly where severe weather starts and stops.

With Dual-Pol scanning, objects on the radar are identifiable (e.g., snow, leaves, bugs and debris). The radar detects volume within cubes that are represented as three dimensional pixels on the radar screen. If within the space every object is the same, it’s one hundred percent correlated (mutual). If hail or other objects are present, it’s no longer one hundred percent correlated.

Laws said a method called Correlation Coefficient detects the diversity of objects that the radar picks up. “Before all I knew was the velocity signature and the reflectivity. Now I can see when it’s no longer correlated, which indicates a possible tornado. Correlation Coefficient identifies debris lofted in the air which confirms the assumption.”

Where once the National Weather Service issued warnings of possible tornadoes with debris signature, Dual-Pol radar confirms a tornado has touched ground. This does not increase lead time, but it does give people downstream time to take cover. In addition, tornadoes forming at night are visible and the need for storm watchers is eliminated.

Chapman named to Board of Trustees at University of Montevallo

FROM STAFF REPORTS MONTEVALLO-Secretary of State Beth Chapman was recently appointed by Gov. Bentley to serve on the University of... read more