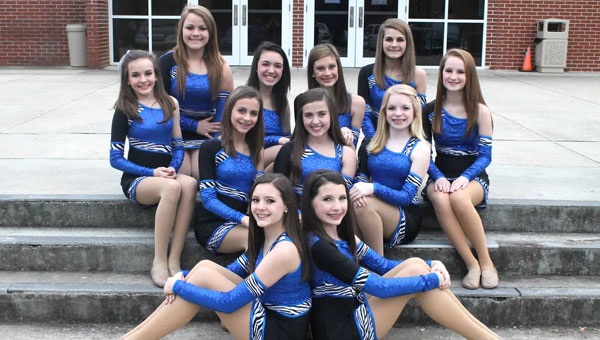 The next week at American All Star Competition in Auburn, they placed first in Kick and Jazz, won a choreography award for their Jazz routine and won the very prestigious Jr. High Sweepstakes award for having the highest combination of scores of all competing Jr. High teams. Hannah Dawson, Lauren Mims and MacKenzie Day also received soloist awards.

Then came the National Dance Team Championship held at Disney World Feb. 1-5. The Starlets made the semi-finals and missed making finals by only 1.5 points.

This placed them officially fifth in the nation.

“These are 11 amazing girls and one proud coach,” Coach Michelle Nivens said.

They celebrated at an end-of-the-year party, where Nivens treated them to dinner at Kobe and dessert at McDonald’s. They were chauffeured to the events in a limousine rented for them by mothers of the girls.

The team’s coach has also received awards for her work with the girls. At annual camps, she won the Coach’s Leadership Award twice.

Michelle Seal Nivens received her bachelor’s degree in Spanish from the University of Montevallo and her master’s in education from UAB.

She began teaching at Chelsea in 2000, where she has coached volleyball, basketball, softball, cheerleading and dance team. She teaches Spanish, sponsors the yearbook, does sixth-grade orientation and coordinates the eighth-grade graduation ceremony.

This summer she will also begin working with majorettes.

Dance Team try-outs for the new year were April 1-5. To try-out or be on the team, the girls must agree to a rigorous set of rules, and the stated disciplinary actions if the rules are broken.

Learn more about the Chelsea Starlets on facebook and their blog at podcasts.shelbyed.k12.al.us/chms-starlets.