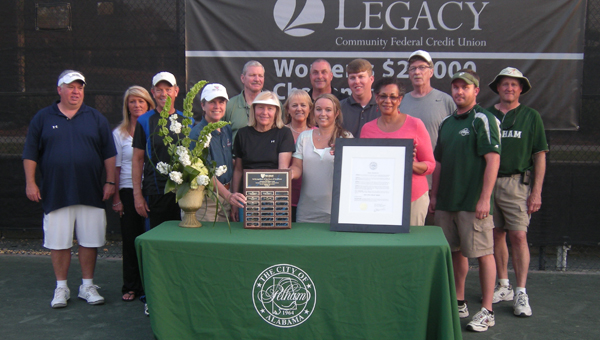 The tournament began April 7 and will conclude April 14 with the winner receiving a cash prize, but more importantly points to add to her ranking to qualify for Women’s Tennis Association events.

“Sometimes people think that this is a Pelham resident-only facility, but its not,” said Waters. “This proves that given tennis is an international sport, even the smallest towns can be as international as we want to be.”

Pelham becomes the 12th tournament on the USTA Pro Circuit calendar to host an event for 10 years or more.

“This is not an easy accomplishment, I can assure you,” said Atkinson during an April 9 ceremony. “It takes a village to run one of these tournaments. It takes a team and you have an outstanding team here at the Pelham Racquet Club.”

The tournament began April 7 with 64 players looking to make a 32-player bracket that began April 9. The event includes an international field including tournament No. 1 seeded Chanelle Scheepers from South Africa.

“It’s kind of humbling to come out here and interact with people from all over the world that they would come to Pelham,” Waters said. “I am always in awe in how much work it takes from the staff to keep these facilities so pristine that they want to come back.”

Waters said the Pelham Racquet Club, in addition to the various recreation and entertainment venues such as the Pelham Civic Complex and Ice Arena and Oak Mountain Amphitheatre, make Pelham a hotbed for events such as the USTA Pro Circuit.

“I see Pelham as an entertainment and recreation destination offering all those different venues. I like that we can not only offer it to our citizens, but be able to enhance the quality of life everywhere,” Waters said.