CHELSEA — A memorial fund has been set up for a Chelsea High School sophomore killed in a traffic accident last week. Nick Hill, 16, was on his way to attend a church conference when his car ran off the road along Shelby County 55.

Police say speed was a factor in the wreck. A church spokesperson says Nick was running late for the conference.

Jon Tavares, a close family friend, said he knew almost immediately following the accident that he wanted to set up a fund for the Hill family. 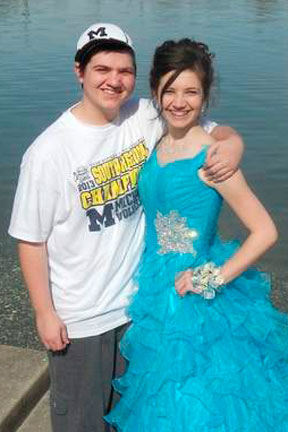 “My goal was to help them pay for the funeral expenses. Their resources are limited and this was so unexpected,” Tavares said.

Tavers said Nick’s mother, Christine Hill, asked that any money collected over the funeral costs be earmarked for the pediatric surgery unit of the Neurology Surgery Department at the University for Michigan, where Nick was born.

“They gave me my son for the 16 years I had him,” Hill said. “Nick was diagnosed before he was born with Dandy-Walker malformation. His brain didn’t form correctly.”

She said Nick spent much of the first weeks of his life in the neonatal intensive care unit at the University of Michigan hospital, following several surgeries.

“Had they not taken care of that, it would have put pressure on his brain stem and caused all kinds of issues — blindness, deafness and eventual death,” Hill said. “We’ve always had a real strong place in our hearts for the University of Michigan for how well they handled things, for how they treated us and how they treated Nick.”

In honor of Nick, Chelsea High School students attended their classmate’s funeral dressed in the University of Michigan’s blue and gold.

According to Nick’s mom, her son’s legacy will be one of “always being a happy person. When I would get down, he would play a song for me about rainbows after the rain. That’s how I would like people to remember him.”

Donations may be made to the Nick Hill Memorial fund at any Heritage Bank of the South, formerly Frontier Bank, or they may be sent to P.O. Box. 414, Chelsea, AL 35043.