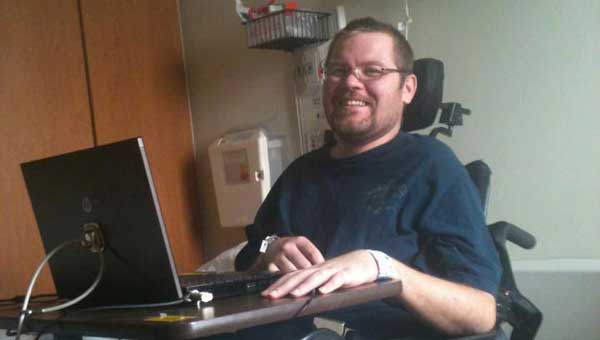 Dean Wilson Jr. is in a wheelchair after contracting MSRA. (Contributed photo.)

No one ever sees adversity coming. Sure, we all know that hard times are to befall us. That’s just a part of life, but sometimes, adversity can completely blindside someone, leaving them and their family searching for answers.

Such is the case with Montevallo’s Dean Wilson, Jr. In a few days’ time in December 2012, the 34-year-old Wilson went from living a normal life to fighting for each breath.

Sharp shoulder and neck pains led to several doctor’s visits, and Wilson was eventually diagnosed with MRSA, a strain of staph infection that is resistant to most antibiotics used to treat regular staph infections.

“We first started noticing the Saturday before the 14th,” she said. “He had woken up with neck and shoulder pain. The following Sunday it got worse, and Monday night we went to the emergency room, and got an X-ray and pain shots.”

Still, the pain wouldn’t go away. On Tuesday, they went to his normal doctor, who thought it might have been a pinched nerve. After missing work on Thursday, the couple went to a chiropractor in Jemison to try and see if he could work out the pain.

It was there that things took a turn for the worse. While Melanie was talking to the doctor in another room, her husband lying down, out of her vision. When it became apparent the chiropractor could do nothing for him, the decision was made to seek an MRI. As she went to get him, they came to a horrible realization.

Wilson was paralyzed from the neck down, and was having extreme difficulty breathing. He was rushed to Shelby Baptist, where an MRI was done. An abscess was discovered on his spine, primarily on his C3 and C4 vertebrae, and he was immediately flown to Princeton Medical Center in Birmingham for an emergency surgery to remove the abscess.

Melanie said the doctors did not seem optimistic about Dean’s chances of survival given the severity of the illness. The MSRA was in his bloodstream, and particularly affecting his lungs.

“He wasn’t even expected to make surgery,” Melanie said. “He only had a 20 percent chance of survival. Even if he did survive, he’d be a paraplegic [to the point that] he couldn’t even shrug his shoulders. The abscess put pressure on the spinal cord, so because of that pressure he basically had a spinal cord injury.”

He did survive the surgery, and was placed in a medically induced coma to allow a ventilator to breathe for him, and allow his lungs to heal. He was brought out of the coma on Jan. 16 and despite the doctors’ concern he would never move on his own again, Dean showed hope. Two days later, he was able to move his fingers. By Feb. 5, Dean was off of the ventilator and breathing on his own again.

Within a week, Dean was moved to the Shepherd Center in Atlanta, where his tracheotomy and feeding tube were removed. While his signs of progress are small, they are leaps and bounds compared to what was originally thought.

“He has some movement of his right arm and left arm,” Melanie said. “He can kind of lift up his right leg a little bit. He uses a special fork with two circles that he sticks his finger and thumb in to feed himself. It’s a bit of work, but he’s working on it”

Dean will continue rehab in Atlanta until May, when the couple hopes to head home. Until then, they have been relying on friends and family.

“We’ve had family and friends help out,” she said. “My friends are coordinating a ramp [for our house]. We have four kids at home, and between my mother and my sister, they’re kind of holding down the fort. People have started taking snacks over to the kids. My father-in-law is working on a way to get [Dean] in the tub.”

While it has been a major setback, and the couple does not know where Dean contracted the infection, both have remained positive about the experience and the future.

“I don’t really feel like there’s ever a step back,” Melanie said. “I believe that he will make a full 100 percent recovery. [We] take it day by day, and just hope [he] gets a little more movement.”

Who will work for your kids?