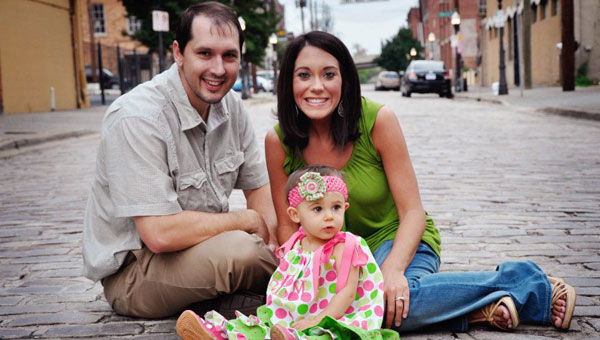 Nic and Allison East enjoy time with Rylee, their little sunshine, who was born with a life-threatening birth defect. (contributed)

“Being prepared for the unknown is one of the hardest things we’ve had to do and continue to do with her,” said Allison East, speaking of her 2-year-old daughter, Rylee, who was born with the life-threatening birth defect CDH (Congenital Diaphragmatic Hernia) and scoliosis.

But Rylee “fills our life with sunshine,” she said. “Overflowing our hearts with love.”

CDH is a congenital malformation of the diaphragm, which allows abdominal organs to push into the proper lung formation.

“There was a small hole in Rylee’s diaphragm,” Allison explained, “which her organs slid through and compressed against her chest and lungs, pushing her heart to the right side of her body.”

Hooked to monitors, she was rushed to Children‘s Hospital, which became their “home,” Allison said. At six days old, Rylee underwent hernia repair surgery. In NICU five more weeks, she went home still on oxygen and monitors for two months.

Scoliosis has Rylee in an upper body cast (her sixth) to help correct her spine.

She’s allowed out of the cast for only 24-hour periods when the cast is changed.

During that time she “gets to soak in a bath as many times as she wants,” her mother said.

Allison said they have experienced “many obstacles along the way.” But Rylee is a happy child and enjoys other children.

“God is so good,” she said. “How amazing our God is to our family.”

She and husband Nic have met some outstanding people who help people like their child, she said.

Allison has opportunities to encourage other parents one-on-one, and to spread CDH awareness through speaking engagements, her latest being at UAB’s Dance Marathon April 19.

April 19 was CDH Awareness Day nationwide. Allison said she hopes that next year, with her community’s help, she can plan a Chelsea parade in honor of her CDH survivor Rylee Mae East.

For more on CDH, more encouraging words from Allison, and pictures of sweet Rylee, find Allison East on facebook.