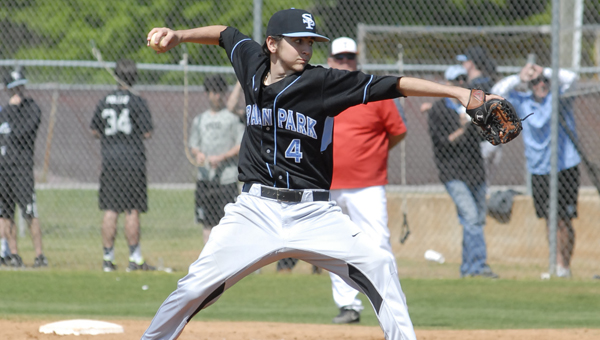 The Spain Park Jaguars’ Trey Hawker pitched seven innings in a 5-4 victory in game-two of their Class 6A first round playoff series against the Thompson Warriors. (Reporter photo/Mickel Ponthieux)

ALABASTER – The Spain Park Jaguars were able to hold off two late rallies to take a 5-4 win in game-two of their Class 6A first round playoff series against the Thompson Warriors on April 20.

Thompson jumped out to a 1-0 lead in the first inning after winning the first game, but Spain Park responded with a four run first inning to take a 4-1 lead.

The Warriors chipped away at the lead and was able to cut the deficit to one heading into the sixth inning. However, the Jaguars added an insurance run when Peyton Walsh doubled to left field to score Austin Haight for a 5-3 lead heading into the seventh.

Thompson mounted a rally in the seventh when Mel Harwell hit a two-out double to spark the Warriors. Jackson Cofer reached base on a Spain Park throwing error, which allowed Harwell to score from second to pull Thompson within one. The Jaguars ended the Warriors’ rally by forcing the next batter to fly-out to secure the 5-4 victory and forcing a third game on April 22.

Trey Hawker pitched a complete game and allowed three runs on four hits with a strikeout and three walks. Matt Berler finished 2-for-3 with a RBI while Will McDonald finished 2-for-4 with a double.

Peyton Johnson took the loss for the Warriors allowing four earned runs on seven hits with a strikeout and two walks.

The Warriors began the playoff doubleheader with a 4-1 victory. Thompson took a 2-0 lead in the second inning and added a run in the fourth and fifth inning after Spain Park scored a run in the top of the fourth.

Jake Walters led Thompson to the win allowing one run on four hits with six strikeouts and five walks. Davis Cox finished 2-for-3 with a double, RBI and a run. Trevor Flynn added a 2-for-2 effort with a run.

Josh Rich pitched six innings and allowed two earned runs on seven hits with two strikeouts and four walks in the loss for Spain Park. Walsh finished 1-for-3 with a RBI.

Game time for game-three is scheduled for 5 p.m. at Thompson.

Thompson senior Nick Hall became the first Warrior wrestler to sign a Division I scholarship when he signed with Appalachian... read more