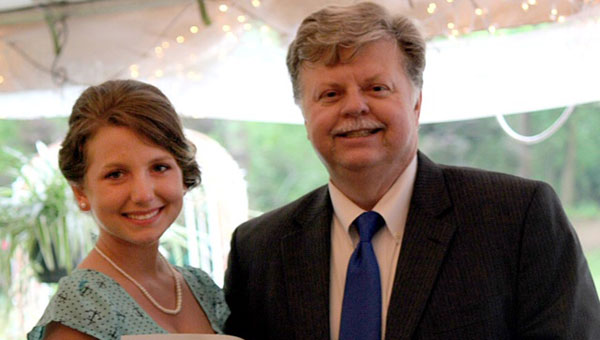 Lillie Gaston, who will serve as the Helena Belle Relay For Life team captain, is pictured with Mayor Mark Hall when she was honored as a Helena Belles Ambassador Scholarship recipient. (contributed)

Lillie Gaston, president of The Helena Belles, recently announced that the service organization will participate as a team at the North Shelby Relay For Life on Friday, May 17 at Pelham High School.

Gaston will serve as team captain for the 44 Helena Belles, who last year sold smoothies and were in charge of preparing the luminaries both around the track and in the bleachers where the candles first spell out “Hope” and “Cure.”

Gaston’s parents are Shane and Deborah Gaston and she has lived in Helena all of her 18 years. Next year she will be attending Jefferson State University studying marketing or business and plans to continue working with The Helena Belles as a junior mentor.

“I do as much as I can because it’s an organization that I love,” she said. “Being in The Helena Belles is the best thing that has ever happened to me; it is a great opportunity to learn to work alongside other personalities and also to learn leadership skills.”

Gaston plays flute in the band, and was a friend of Carson Sumpter, a fellow PHS student who died of cancer in 2011. She also sings in the choir and sold ads for the PHS yearbook. She is a Venturer with Scout Crew 532, which has offered her the opportunity to rappel, rock climb, raft and be involved with service projects and leadership training.

“The Relay For Life is a great environment and being there all night is fun,” she said. “There is Zumba at 3 a.m. During the day you get to meet the survivors and the evening ceremony honoring people who have passed is very moving.”

Gaston said she is appreciative of all she learned from Bob Van Loan and Amy Turner during last year’s event.

Lillie recalls her aunt, Ann Galloway, who had cancer during the time her uncle, David, was deployed.

“It was a difficult situation as they had three children; luckily my mom was able to travel to Mobile and help them out,” she recalled.

The Helena Belles will be selling luminaries, Chinese lanterns and tiki torches to anyone who wishes to honor a friend or loved one during the relay.