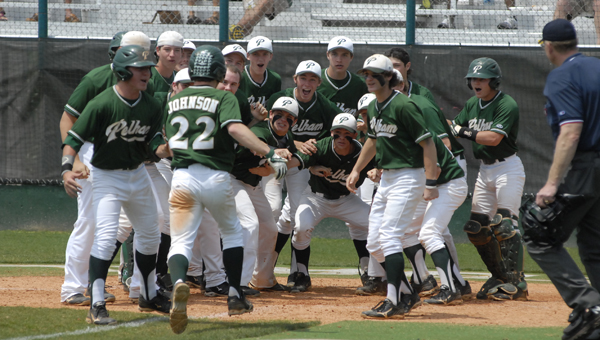 The Pelham baseball team prepares for a road trip to Auburn in the state playoff semifinals. (File)

PELHAM –One pitch at a time.

It’s a simple philosophy, but for Pelham baseball coach Sean Anderson, it has become a mantra. As the Panthers head into the AHSAA Class 6A Baseball State Semifinals against Auburn High, Anderson said he is sticking to his guns.

“I just tell them the same thing I’ve told them all year,” Anderson said. “One pitch at a time. We’re not playing individual teams, we’re playing baseball.”

It’s been an effective M.O., to say the least. The Panthers swept Prattville in the first round, knocked off Spain Park (who had just upended No. 1 Thompson) in the second, and beat Baker in Mobile in three games in the most recent round.

The Panthers will take to the road again May 10, travelling to Auburn to take on the Tigers. Anderson said he doesn’t expect his team to play any differently, as Pelham is 14-5 away this season.

“I don’t know if it bothers the kids any,” he said. “There’s something to be said for playing at home, but it doesn’t affect me coaching.”

Anderson went on to say that while his team had its share of leaders, their strength was in their ability to pick each other up.

“Every game had somebody [step up],” he said. “They depend on each other. So far they’ve been looking at each other [to carry the load].”

With just two series wins standing between Pelham and a state title, Anderson said his team is keeping focused on playing a complete game in each area.

“Whoever can throw strikes, play defense and swing the bat in opportune times [will win],” he said. “One facet of the game is not going to win it.”