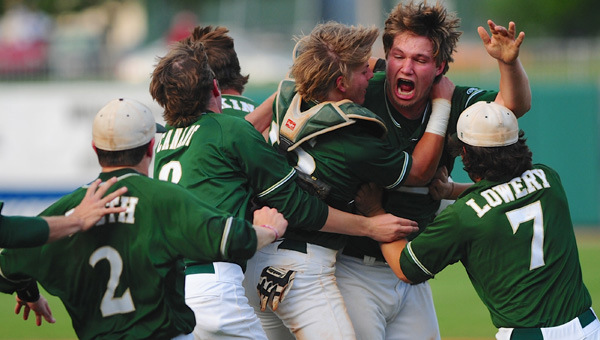 Pelham players mob pitcher Jack Pierce after Pierce finished off Hewitt-Trussville in game two to clinch the AHSAA Class 6A State Championship for the Panthers on May 18 at Riverwalk Stadium in Montgomery. (Reporter Photo/Jon Goering)

The Pelham Panthers remain the last team standing at the end of the AHSAA State Baseball playoffs, taking down Hewitt-Trussville in the second game of the Championship Series, 1-0 to capture the 2013 crown.

It was a pitcher’s duel throughout, as Pelham’s Jack Pierce squared off against Hewitt’s Alec Talley for seven complete innings, with Pierce giving up no runs on just two hits.

The contest took the shape of a heavyweight battle, as neither team gave an inch through the first three frames. Pelham was able to get runners in scoring position in each inning, but were unable to move them across the plate.

Flash gallery not showing up? Click here to view photographer Jon Goering’s photos from the game.

It wasn’t until Chase Brashier knocked a double and then scored on an Aaron Anderson double to put the Panthers up by a run, 1-0, that either team scored. Frame by frame ticked by, with Pelham stranding seven runners through the course of the game and Hewitt struggling to get on base.

Pelham’s defense took over from there. Pierce continued to hold the Huskies at bay, striking out the side in the bottom of the fourth and inducing ground balls and fly outs through the last three innings to keep Hewitt off the board. Hunter Stovall at catcher, Jackson Pruitt at shortstop, Brashier at first, and Sam Finnerty at third recorded 19 total putouts, keeping the two-hit performance intact.

In all, Pierce tallied eight strikeouts, the last of which ended the game and sealed the win and the championship for the Panthers.

Coach Sean Anderson was at a loss of words following the game.

“I really don’t know what to say,” he said. “These guys have not stopped. During the year, we’ve had fun. The support we have is incredible.”

Pierce said he felt his performance came from a sheer desire to show his ability.

“(Winning state) means everything to me,” he said. “I had something to prove today.”

Thomas Lowery, the winning pitcher of Game 1, was named series MVP. He said the award was nice, but was more concerned with the overall goal.

“(MVP) means a lot,” he said. “But not as much as being state champs. I hate we didn’t give (Pierce) more run support, but he didn’t need it.”

Photo gallery from game one of Pelham’s AHSAA Class 6A State Championship series against Hewitt-Trussville.