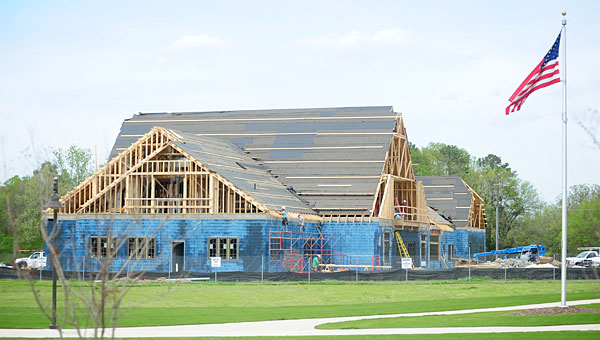 The Alabaster City Council approved an agreement to rent the second floor of Alabaster’s new City Hall to the Alabaster Board of Education during a May 20 meeting. (File)

The Alabaster Board of Education is set to move its central office into the second floor of the city’s new City Hall when the building is completed in late summer after the City Council approved an agreement with the School Board during its May 20 meeting.

Through the rental agreement, the city will lease 4,400 square feet on the second floor of the new City Hall to the School Board for the next three years. The city and School Board will have the option to extend the lease agreement up to two additional years after.

The building tentatively is scheduled to be completed by Aug. 12, according to Alabaster City Manager George Henry.

Through the agreement, Alabaster will charge the School Board $3,800 per month in rent, which will include all utilities except phone lines.

Also during its May 20 meeting, the City Council approved a contract amendment with the Blalock Construction Company and Turner-Batson Architects, the construction and architectural firms for the new City Hall building, respectively.

Through the amendment, the city will pay an additional $487.758.16 to build out and furnish the second floor to house the School Board. A $26,150 architectural and engineering fee is included in the additional expense.

The $487.758.16 will be added to the about $3.4 million bid the city originally accepted to construct the new City Hall building, which currently is under construction next to the Alabaster Senior Center off Seventh Street Southwest.

“They won’t have to buy anything except the computers,” Henry said of the School Board.

In addition to the 4,400 square feet for the School Board’s central office, the new City Hall’s second floor also will include about 3,000 square feet of controlled-access storage space for the city, Henry said.

The city’s central school office staff members currently are housed in an office condominium at 6919 Alabama 119, which the School Board previously leased through the end of August. Henry said the School Board’s lease with the city will go info effect after its current lease expires.