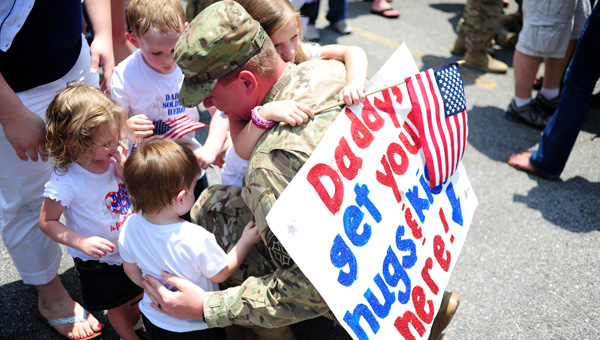 Chris Henderson, a soldier with the Bravo Company 1/167th Infantry Battalion of the Alabama National Guard greets his family, Ashley, Baileigh, James, Michael and Madison on May 20 after a nine-month deployment. (Reporter Photo/Jon Goering)

PELHAM – Cheers, tears, smiles and hugs all played out against a red, white and blue background in Pelham today as Bravo Company 1/167th Infantry Battalion of the Alabama National Guard came home.

Highway 31 was peppered with handmade signs – all with different words but sounding the same message: “Welcome Home. We love you. We thank you for your service to your country.”

The 100-plus-member Bravo Company spent most of the past year in Afghanistan conducting security missions. According to Alabama National Guard Sgt. Major Ed Stasiak, who was on hand to welcome his returning soldiers, “they did over 400 missions with no casualties. We have two Purple Hearts for injuries received during combat, but no casualties and that’s pretty significant for an infantry battalion.”

Gallery not showing up? Click here for photographer Jon Goering’s photo gallery from the homecoming.

But there was no talk of injuries or combat on this day as the soldiers began catching up on all that happened during that long deployment.

And, a lot can happen during that length of time. Just ask Chris Horton, a father of two girls who came home to meet his brand new baby boy for the first time. 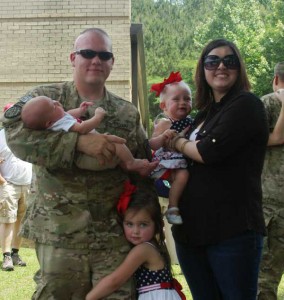 Chris Horton is welcomed home by him family, including new son Roanen, Aria , Stella and Victoria. (Photo by Linda Long/For the Reporter.)

Already, Horton, who had one daughter hanging onto his knee, can’t take his eyes off his 3-month-old son.

“Yeah,” he said softly as one of his daughters hangs onto his knee, “I sure do like him.”

Across the way, Gail Bullard can’t take her eyes off grandson Bo Holloway.

“I worried about him every day,” she said, tears filling her eyes. “I did all I could for him. I put him in God’s hands and God brought him home.”

Similar scenes were repeated throughout the National Guard parking lot as families and friends swept up their soldiers to take them home.

According to a National Guard press release, over the past nine months, the Pelham-based Bravo Company was stationed at a forward-operating base in Kabul. They safely moved approximately 16,500 personnel and traveled more than 50,200 demanding miles.”