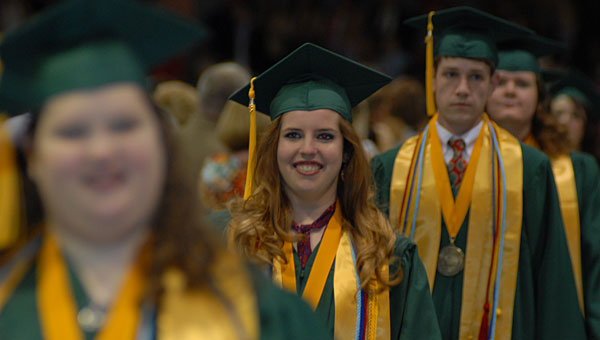 Pelham High School graduate and valedictorian Emily White, center, smiles as she approaches her seat during the school’s May 23 graduation ceremony at the Pelham Civic Complex. (Reporter Photo/Neal Wagner)

For the past four years, Pelham High School Class of 2013 president Justin Brooks and his classmates have frequently heard the same phrase from PHS Principal Bob Lavett: “It’s a great day to be a Panther.”

“Wherever life may take you, remember that every day is a great day to be a Panther,” Brooks said during the PHS graduation on May 23 at the Pelham Civic Complex and ice arena.

“Justin, you stole my best line,” Lavett said a few moments later. “It’s always a great day to be a Pelham Panther.”

No matter where the 399 seniors who walked across the stage during the ceremony go in their lives, Lavett reminded them they will always be a part of the Panther family.

“Keep us up-to-date. We are only an email or a tweet away,” Lavett said. “You leave behind a record of huge success, and for that I say ‘thank you.’

“Now is really a beginning. It’s the beginning of the critical years of your life,” Lavett added. “Have a plan. Write it down and make it happen.”

The nearly 400 graduates secured more than $5.6 million in scholarships, and several graduates were planning to enter the U.S. Armed Forces.

“It’s finally our time to walk across that stage and close the curtain on this chapter of our lives,” said valedictorian Molly Bogan. “I’m surrounded by some of the brightest and most intelligent students Pelham High School has ever seen.”

During his address to the Class of 2013, Pelham Mayor Gary Waters encouraged the students to be safe while moving forward with their lives, and encouraged them to seek support when dealing with future hardships.

“If you are in a moment of crisis, call someone. Call your parents, your grandparents, your aunt, your uncle, your friends,” Waters said, urging the graduates to never consider suicide an option. “It comes down to this: There is nothing you have done, are doing or will do that can’t be reconciled by those who love you.”

BCS golf teammates carry load for each other