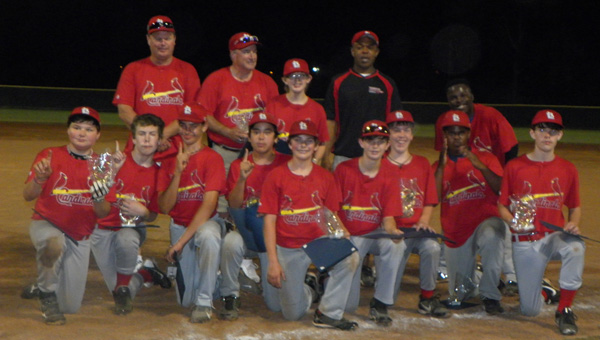 The Alabaster Youth League 13-14-year-old baseball championship was captured by the Cardinals. (Contributed)

The Alabaster Youth Baseball held its 13 and 14-year-old championship game May 23 between the Cardinals and the A’s, with the Cardinals getting the upper hand, 12-5.

Despite what the scoreboard may have indicated, the game was a closely fought contest between two great teams.  After the A’s Zach Durrett and Andrew White got them on the board first, the Cardinals pulled even on a Greg Byrd two-run double.
The two swapped the lead through the first two innings, before the Cardinals used a big third inning to pull ahead for good, clinching the championship.

“It’s hard to put into words,” said Cardinals coach Craig Pearce. “I’ve known most of these kids since tee ball.”

While the championship is memorable for several reasons, it may hold a special place for the parties involved for another reason.The game will be the last most of the members of each team will participate in, as Alabaster doesn’t host a league for ages 15-and-up.

“We’ve talked about it before,” said Cardinals pitcher Sam Pearce. “Most of us have been playing since we were tee ballers, and knowing that (some) won’t be playing anymore, it’s kind of sad because they’re all good ball players. I don’t want to see any talent go to waste.”

Still others said they weren’t thinking about endings.

“I haven’t (thought about it),” said A’s starter Austin White. “I’m just out here to play baseball with my teammates.”

A’s coach Chris Newberry said the amount of talent was greater than the outlets for it to shine.

“Most of my guys are 14,” he said. “With Thompson being a 6A high school, and just the amount of (kids) in this age group, there’s a lot of talent. Everyone on my team is going out for the 9th grade team.”

While it is the end of the road for some of the players, Cardinals cleanup hitter Joseph “Jo-Jo” Ford said he was just glad to be a part of the winning team.

“This team is as boisterous as it is fun,” he said. “The season was long, but it was fun.”

FROM STAFF REPORTS Oak Mountain’s Toni Payne has been named the Gatorade Player of the Year for the State of... read more