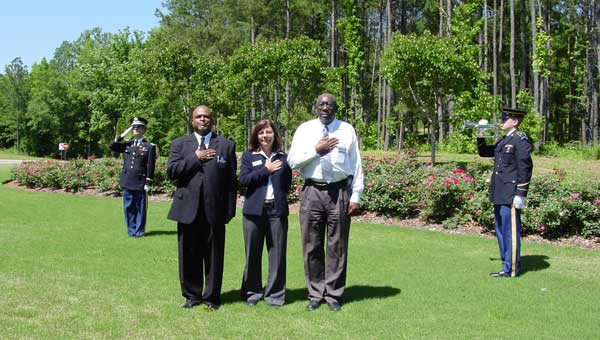 MONTEVALLO – The Alabama National Cemetery in Montevallo presented its third annual Tribute to Americans’ Patriotic Service on May 24.

The National Cemetery Administration’s mission is to honor veterans and their families with final resting places in national shrines and with lasting tributes that commemorate their service and sacrifice to our nation, according to the event’s program.

“The reason we hold this program is because throughout the year there are a number of veterans that are interred and for whatever reason family isn’t present and because they arrive unaccompanied military honors are normally not arranged by the funeral homes,” said Quincy Whitehead, director of the Alabama National Cemetery. “(The National Cemetery Administration) feels that it is very important that every veteran accompanied or unaccompanied should receive the honors that are due to them because of their selfless service to our great nation. I thought it was very fitting and appropriate to hold the program the Friday before Memorial Day.”

Whitehead opened the program followed by the invocation, words of expression, and benediction by Chaplain Michael Raymo of the Birmingham VA Medical Center.

Cemetery staff read the 35 names of this year’s honored veterans, while SPC Stephan Vance played the military honors with TAPS (a tradition of 150 years). Vance and 1st Lt. Brandon Sanders did the flag folding and presentation.

No injuries after medical emergency at PHS graduation

No injuries were reported after a medical emergency at the Pelham High School graduation on May 23 at the Pelham... read more