Military teaches Tressillian to be a leader 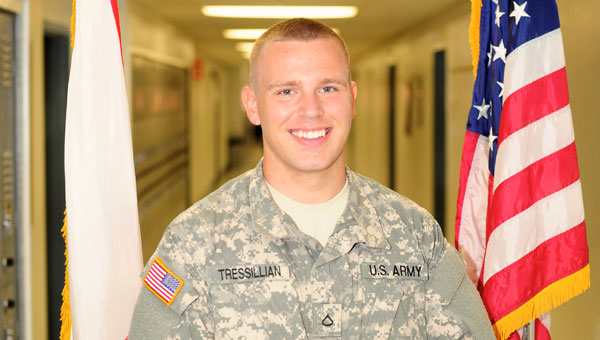 Like many high school seniors, Cody Tressillian soon will be packing his bags and hitting the road for a post-graduation trip.  But, for Cody this won’t be a vacation.  Instead, the Vincent High School student will be fulfilling his military obligation as he heads to Fort Jackson, S.C., for basic training in the Army National Guard, which he joined a year ago.

That step was a natural progression for Cody whose goal of a military career has never wavered.   For four years, Cody has been a driving force in the Vincent Junior Reserve Officer Training Corps (JROTC) program, rising to the rank of captain. This is a young man who admits he actually thinks it’s fun to do pushups, sit-ups and 10-mile runs.

“The leadership qualities I’ve learned here have given me the confidence to know that I can handle situations and lead a group of people,” he continued.  “The ROTC has also helped me with the attributes I need to be physically ready for the military.

Cody said his push for a military career comes from several sources, including family members who served.

“This was just an overwhelming thing that hit me,” he said. “I enjoy it so much. It just feels like this is where I belong.”

After this summer’s basic training, Cody plans to return home to enroll in UAB working toward a career in mechanical engineering.

Rise in great shots at Ballantrae