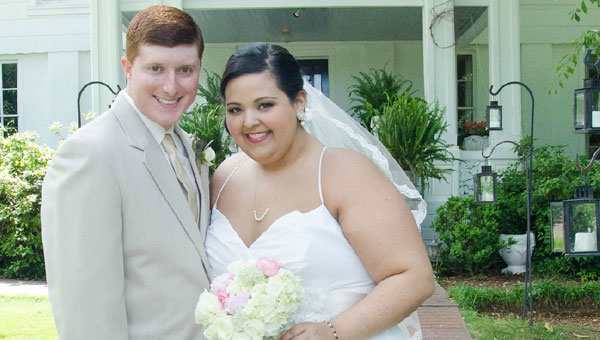 Jessica Leigh Wilder of Pelham and Charles Todd Self of Gardendale were married at 6 p.m. on May 4, 2013, at Magnolia Springs Manor in Helena.

Parents of the bride are John W. Wilder II and Jacqueline Ann Wilder of Pelham. Parents of the groom are Diane C. Gilbert and the late Phillip Gilbert.

HotHouse Design Studio provided the flowers. The bride’s bouquet consisted of peonies, garden roses, hydrangeas and other various romantic flowers. Her bouquet was also wrapped in the covered buttons of her great grandmothers silk wedding dress and adorned with a vintage cameo that belonged to the groom’s grandmother.

The bride’s dress was an A-line ivory silk taffeta dress designed by Alfred Angelo with a chapel train and spaghetti straps that crisscrossed in the back. She wore a flower and rhinestone sash in a champagne color that was purchased at Bella’s and her lace and Swarovski crystal lined veil was from the Westwood Collection.

The charming Southern wedding took place at Magnolia Springs Manor, an antebellum home in historic downtown Helena. After the ceremony, which took place in the Azalea garden, guests were treated to an Italian buffet dinner, which was provided by Majestic Catering of Bessemer. Photography was provided by Katie.Elise Photography of Alabaster. The couple left in a 1952 wedding white Bentley and honeymooned in the Bahamas.

Madrigal-Sahadew Dan and Mary Madrigal, of Red Bud, Ill., are proud to announce the marriage of their daughter, Leah Madrigal,... read more