Driver transported to hospital after car crashes into ditch 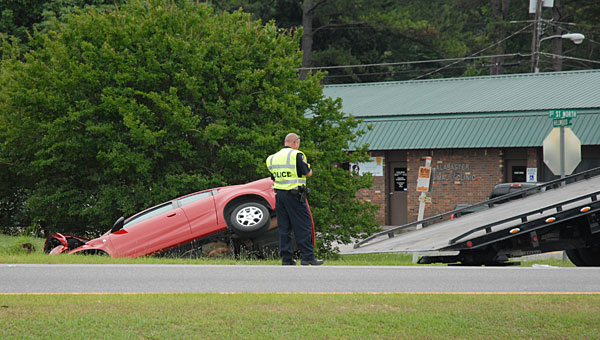 Police close one lane of U.S. 31 on June 6 while a wrecker prepares to remove a red Saturn from a ditch near the Shelby Motor Lodge. (Reporter Photo/Neal Wagner)

The driver of a late-model Saturn was transported to Shelby Baptist Medical Center with non life-threatening injuries after the vehicle crashed into a ditch on U.S. 31.

The single-vehicle wreck happened at about 1 p.m. on June 6 when the vehicle left the road and crashed into a ditch near the Shelby Motor Lodge in Alabaster. The back end of the vehicle was suspended in the air while emergency responders loaded the driver into the ambulance.

The driver’s name was not released. Alabaster police were forced to close the outside lane of U.S. 31 while crews loaded the vehicle onto a wrecker.

In addition to the Alabaster police and fire departments, Regional Paramedical Services also responded to the wreck.

Witnesses rush to help the victims in a wreck on Shelby County 26 in Saginaw involving the silver Ford Escape,... read more