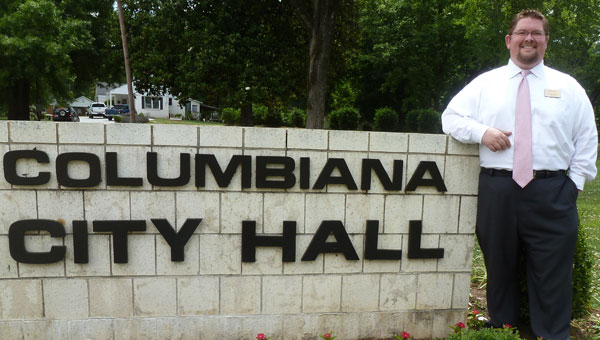 Mark Frey was appointed city clerk by Mayor Stancil Handley and approved by the Columbiana City Council on May 7. May 8 was his first day.

Frey is the son of Terry and Judy Frey. He grew up on Logan Martin and graduated from Coosa Valley Academy. He met wife Mandy at church and married a year later. Frey has owned cell phone businesses for 18 years through good times and bad. The Freys moved to Columbiana after Mark opened his Go Wireless store. They have two sons and are members of Columbiana United Methodist Church.

The Freys are strong believers whose faith has been tested both physically through family health issues and financially when Sprint canceled Frey’s contract unexpectedly last fall in Sprint’s move to downsize in smaller markets. The irony was Frey had his best two months of sales before the cancelation.

Throughout the next few months, Frey sought God’s will for their lives as their world fell apart financially. One day a couple stopped and asked if they would be willing to sell their beautiful home on Meyer Street. After much prayer, they sold their home one day before foreclosure with enough proceeds to buy a mobile home. Their monthly expenses were cut dramatically. Then Mayor Handley asked if he would be interested in the city clerk position. After prayer, Frey said yes and God confirmed when the council approved his appointment.

“Mark is a very intelligent man who loves Columbiana,” said Handley. “He is outgoing and friendly. He is learning fast and I am absolutely thrilled that the council approved my choice for City Clerk.”

Frey has dealt with employees, payrolls and dealing with a budget as a businessman. The city runs like a business and is especially about relationships. His goal is for the city to function as a team from the mayor to all employees.

“I love my job. I truly believe that God was in every step my whole life to train me for this job,” said Frey. “This is what I was meant to do.”

Jacqueline Head, SCHS valedictorian and winner of the Johnson-Pope Award, the highest award given to a SCHS student, will attend... read more