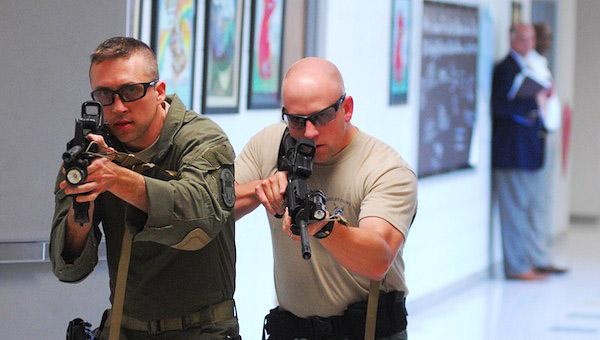 Deputies with the Shelby County Sheriff’s Office search the halls for a simulated school shooter during an active shooter training exercise at Valley Intermediate School on June 11. (Reporter Photo/Jon Goering)

A man dressed in a white T-shirt and cargo pants stormed into the hallway of Valley Intermediate School the morning of June 11 screaming demands while firing blanks from an AR-15 rifle.

“My daughter is dead. Who wants to be next?” the man yelled to the about 15 Shelby County School System teachers and administrators lining the hallway during the training exercise.

After the man retreated into a classroom, a team of Shelby County Sheriff’s Office Tactical Response Unit deputies armed with unloaded AR-15 rifles moved down the hallway and set up a perimeter around the man’s location.

The scenario was one of several staged by the Sheriff’s Office throughout the day at VIS as part of a Shelby County School System active school shooter training exercise. The exercise included about 75 Shelby County Schools employees from nearly every school in the county, and sought to prepare them for a worst-case scenario.

The exercise came in the wake of a December 2012 school shooting in Newtown, Conn., and a February incident at Chelsea Middle School, during which a gunman held several students hostage in the school’s locker room.

“In December, our world changed. It changed the way we work and the way we do things,” said Assistant Superintendent Dr. Lewis Brooks. “So we have worked with law enforcement in Shelby County to put a greater emphasis on safety.”

Shelby County Schools recently partnered with the Shelby County Commission to fund several safety-related upgrades at the county’s schools, including limiting access to schools by installing additional locks and doors on the buildings.

“Things will be changing at your schools,” Brooks told the teachers.

“It doesn’t take but just a second. If you leave a door propped open for just a second, something bad can happen,” Turner said.