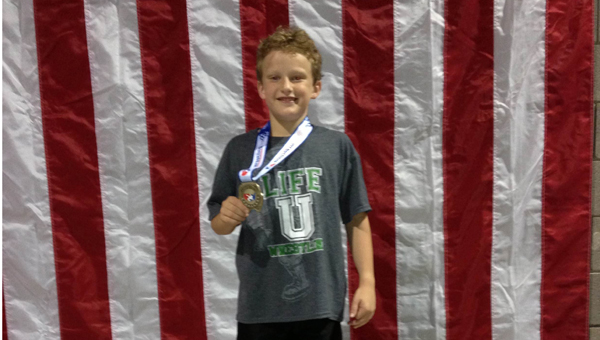 Every athlete dreams of the day they can stand above their peers and be crowned a champion in their respective sport. To get there involves a great deal of hard work, dedication to their craft and in most cases, a number of years working to perfect their game.

That said, it wasn’t exactly an overnight success, either.

Before Harris stood among his peers at the center of the Georgia World Congress Center, hoisting his medal, it took him three years of hard work and hard knocks. His father, Chris, said that Sam lost his first 14 matches in a row before capturing his first.

“This was his first tournament win of this magnitude,” he said. “He had never won state, (but was) runner-up.”

While success eluded Sam, Chris, who is also his coach, worked out a training method that allows wrestlers to see the results of their hard work. The method also gives wrestlers the opportunity to physically view their goals and means of achieving them.

“Its my first year to coach,” Chris said. “I bought a bunch of Mason jars (and marbles). Every time you came to class, and gave it your all, you got a marble.”

Harris said each time a marble was earned, Sam would place them in a jar. The filling of the jar over time served as an indication of how hard he was working. While it offered no special powers, Harris stressed that the jar’s measure of Sam’s preparation helped with getting ready for the Southeast Regionals.

“It’s not magic,” Chris said. “(It’s) a reminder of a visual goal. When you get out there and dominate your opponent, you’ll know it’s because of your hard work.”

With the hard work in mind, Sam took on all comers at the Georgia World Congress Center and took gold in the Olympic-style wrestling format. His coach said he was pretty impressed with the effort, to say the least.

“He earned his marbles,” said Chris.

By DREW GRANTHUM / Sports Writer Then there were two. Of all the players with ties to Shelby County in... read more