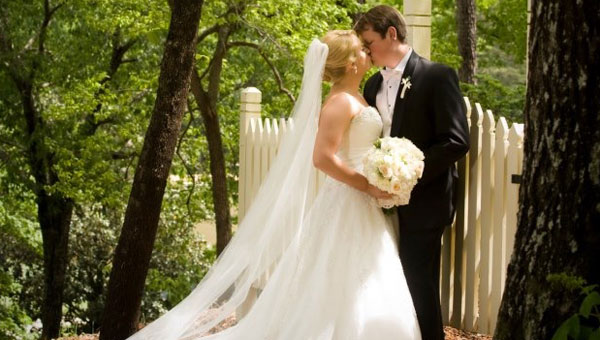 Paige Elizabeth Phelps of Helena and Clark Russell Osborne of Vestavia Hills were united in marriage on Saturday, May 4, 2013, at Shoal Creek Golf and Country Club in Birmingham. The 5 o’clock wedding was officiated by the bride’s uncle, Dr. James Robert Chatham. The bride’s parents are Mr. and Mrs. Jeffrey Scott Phelps of Helena. The groom’s parents are Mr. And Mrs. Brad Allen Osborne of Vestavia Hills.

The groom is a 2011 graduate of Auburn University where he received a bachelor’s of science degree in civil engineering. During his time at the university, Mr. Osborne was a member of the Sigma Nu fraternity. Clark is currently employed with KLMK as a civil engineer.

The bride carried a beautiful bouquet of cascading white roses with variegated pink and white hydrangeas and light pink peonies. Her dress was a signature embroidery and Swarovski crystal gown with a fitted bodice featuring a sweetheart neckline with organza fabric.

The wedding took place in the chapel at Shoal Creek Golf and Country Club in Birmingham with a reception that followed in the Country Clubhouse. The couple honeymooned in Key Largo, Fla., after the wedding and will also be visiting St. Lucia Island in November to celebrate their nuptials. Paige and Clark will be residing in Springfield, Mo.

Wilder-Self (contributed) Wilder-Self Jessica Leigh Wilder of Pelham and Charles Todd Self of Gardendale were married at 6 p.m. on... read more