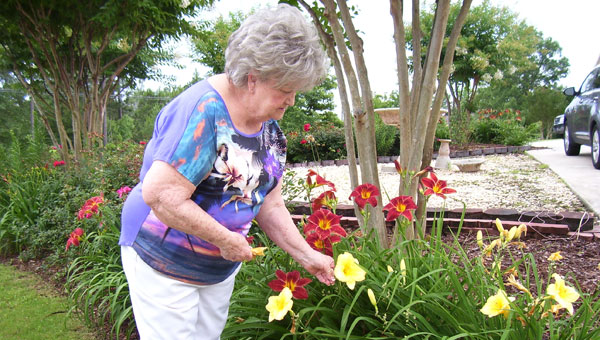 Although Betty Chesser is unable do much in her flowers now, she still enjoys the beautiful lilies, irises, lantana, ferns, clematis, peonies, hibiscus and hordes of other flowers and shrubs she and family members transferred from her house on the hill in “old” Chelsea to her yards at Tara. (contributed)

When Betty Simmons attended Chelsea School, she lived along side Shelby County 39 at the present-day entrance into Twin Oaks subdivision, and walked to school up 39, which was then unpaved, she said.

“Remember the brown and white saddle oxfords we wore in the fifties? We would polish and polish them, then somebody would step in a mud hole and splatter them.”

Betty Simmons Chesser and I sat in her living room recalling old times after walking around admiring her yard full of beautiful flowers.

Most of them were brought from the house atop the hill behind the old Church of God building in Chelsea, where she and husband Allen raised their three children, she said.

They were planning their new home at Tara when Allen died more than 10 years ago. After his death, daughter Darlene helped her redesign the house so family members could live with her. Betty lives on the main floor while son Johnny has his private space and the family of Darlene and husband Larry Kelly live on the second floor. The terrace floor is her day care center, Betty said.

Son Kenny and his family live at the old family place on Shelby County 39 and her grandchildren play under the big oak tree where she played, Betty said.

Her parents moved there from the Narrows 75 years ago, she said, when she was three months old. Her brother Charles still lives at Chelsea. Her brother Murriel and Sister Minnie Catherine Rogers are deceased.

Betty said after Allen died, Darlene told her, “Mama you need to find something to do now to fill up your time.” So she prayed about this one night, and the very next day someone called to ask her about babysitting for them. Her day care evolved from there.

Betty’s health won’t allow her to do much in her flowers anymore, so she has someone come in and weed them. But her life and her heart are full with the beautiful bouquets she arranges, the 12 wonderful children in her day care and her own wonderful family. She has seven grandchildren and four great-grandchildren.