A woman currently being held in the Jefferson County Jail is also facing charges in Shelby County related to credit card thefts from multiple Pelham businesses. 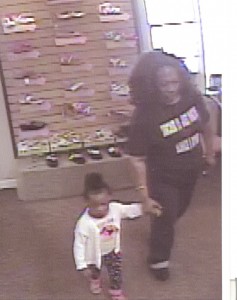 The woman pictured in this surveillance footage is facing credit card theft charges in Shelby County after she is released from the Jefferson County Jail. (Contributed)

Deborah Smith, a 51-year-old Birmingham resident, was booked into the Jefferson County Jail on June 8 after she was arrested by the Trussville Police Department on three charges of illegal possession of a credit card, one count of trafficking a stolen ID, one count of obstructing justice and one count of identity theft.

She currently is being held in the Jefferson County Jail on bonds totaling $105,000.

Once she is released from Jefferson County custody, Smith also is facing similar charges from several other area municipalities, including Pelham.

About a week before Smith was arrested in Trussville, the Pelham Police Department released a photo of her on the department’s Facebook page.

In the Facebook post, police alleged Smith had been stealing credit cards from employees’ purses at area retailers and using the cards to make “major purchases.” She typically had a small child with her in surveillance footage, according to police.

Pelham Police Department Lt. Pete Folmar said Smith allegedly was involved in thefts from multiple businesses in Pelham. She will be transported to the Shelby County Jail to face the Pelham-related charges after her charges are resolved in Jefferson County, Folmar said.

Alabaster City Schools will use the same registration packet for the upcoming school year as the Shelby County School System.... read more