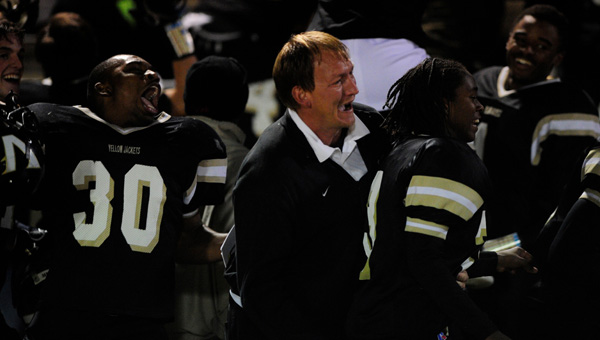 After two years as the head coach of the Vincent Yellow Jackets, Zeb Ellison will head to Chelsea High School to become the Hornets’ defensive coordinator.

The move, which was approved by the Shelby County Board of Education on June 19, will also include Nathan Fordham, Ellison’s offensive coordinator at VHS. Ellison will join first-year Chelsea coach Chris Elmore’s staff after going 16-7 with two playoff appearances at the helm of the Yellow Jackets.

Elmore said he felt the hiring of Ellison was a case of right place, right time.

“It was one of those deals where we had a chance to hire a quality coach and took it,” he said. “We interviewed him with the other candidates, and a job opened up teaching wise (for Ellison’s subject).”

Elmore said Ellison’s hiring allows him to be able to focus more on the offensive side of things. Elmore also said Fordham’s place on offense will help make things run more smoothly.

“(He’ll) coach running backs, and I’ll coordinate the offense,” he said. “He’s going to do well for us.”

While Ellison and Fordham settle into their new roles, the search is on at Vincent to find their replacements.

Vincent Athletic Director John Hadder said while losing Ellison and Fordham was tough, they weren’t completely at a loss. He said the team had been practicing, although several players were participating in offseason basketball workouts before joining the football team full-time in mid-summer.

“To be honest, June is a big month for basketball,” he said. “A lot of our guys play both ways.”

He also said if morale was down, the team wasn’t showing it.

“(We’ve) had good attendance at workouts,” he said. “We just try to keep going on.”

Hadder said there had been a candidate selected for the job, but could not state the person’s name because it had not be approved by the Board of Education.

“We’ve already conducted interviews, and offered the job,” he said. “It’s probably going to the board July 2, if it goes like it should.”

He also acknowledged the new coach will be at a disadvantage because of the late start.

“It’ll be tough on the new coach to get to know the kids,” he said. “But some things can’t be helped.”