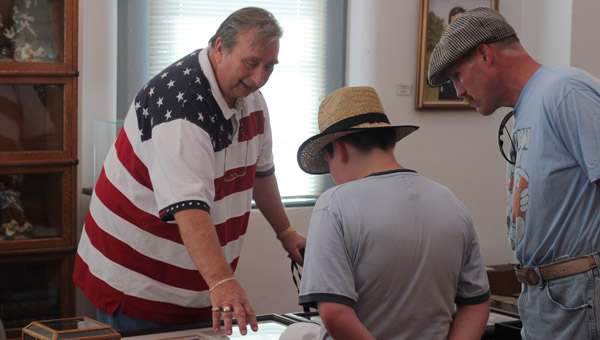 Frank Banks shows off some of his collection to visitors at Columbiana’s Liberty Day in June. (Photo by Tyler Essary/For the Reporter.)

COLUMBIANA – If it’s bizarre, quirky or even downright weird, chances are it can be found in Frank Bank’s Historical and Oddity Museum. According to the Columbiana resident, his collection represents a lifetime of seeking out “ anything that’s just plain odd.”

Perhaps among the oddest to date is the cast of a big foot alleged to actually belong to Big Foot. According to Banks, the footprint is the closest confirmation he’s seen that the creature actually exists. Banks says the cast dates back to 1967 when two California men riding on horseback captured the footprint along with the creature’s image on video. Later, the History Channel used the video in a piece exploring the existence of the mythical, or maybe not so mythical, creature.

“This is the only video that’s been proven not to be a fake,” Banks said. “It’s been studied by NASA, noted anthropologists and others. In one study, researchers used strong, healthy, running athletes hooked to light sensors and had them imitate the creature’s walk. What they proved is that a human can’t walk that way. In other words, they proved this isn’t a human being in a monkey suit.”

Banks’ big foot is a cast of the original image, which now resides in the Smithsonian and is one of the stars in his unusual collection of things offbeat. The transplanted New Englander’s interest in collecting began when he was 14 years old, a teenager on the East Coast and a frequent visitor to American Bandstand, the legendary rock-and-roll dance show popular in the 50s and 60s. “That’s where all the rock-and-roll stars got their start. I used to get all their autographs,” he said.

Those first few autographs led to the accumulation of more than 20,000 items of movie memorabilia, a collection that includes gold and platinum record awards, movie props and even outfits actually seen on screen. But, a look back at Hollywood is only the beginning. Banks’ museum also claims “the largest collection of historical hair in the South, all DNA certified. The collection includes locks from George Washington, Napoleon, Abraham Lincoln, Mary Todd, and Mary Surratt, one of the conspirators in Lincoln’s assassination.

“Now, we’re not talking about large pieces of hair,” Banks said. “The rarer the hair, the smaller the pieces.”

The collection also includes artifacts from the sinking of the Titanic, items from the assassination of John F. Kennedy and World War II items including a flag taken from the Japanese upon their surrender aboard the USS Missouri.

Banks, who said he lived in 15 different states during his career in the steel mills, decided to settle here and call Alabama his home. Although his museum is not open to the public these days, he often exhibits some of the items at local events, including this year’s Liberty Day in Columbiana.