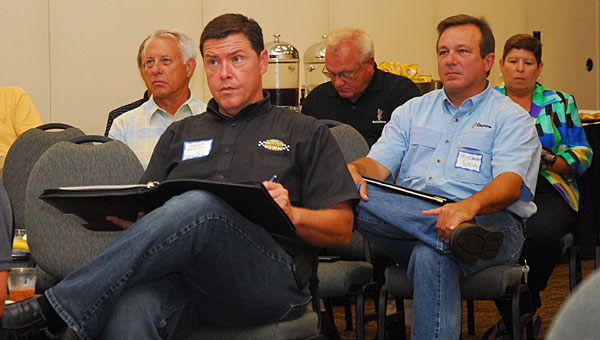 Some Pelham business owners said they were opposed to a proposal to raise the city’s sales tax, while others touted the plan as a way to improve Pelham’s economy during a July 23 meeting at the Pelham Civic Complex.

During the meeting, which drew about 50 business owners and city officials, businesspeople shared differing opinions on the sales tax proposal. If passed, the plan would raise Pelham’s sales tax by 1 percent, bringing the city’s total sales tax to 9 cents per dollar.

The 1-cent sales tax increase would feed a Pelham education fund, which could only be spent on educational items defined by the council. City leaders also are considering breaking away from the Shelby County School System to form a separate Pelham city school system.

Tom Vigneville, owner of Royal Bedding in Pelham, said he opposed the tax hike because it would negatively impact his business.

“I pay 60 different taxes as a business owner. When is enough enough?” Vigneville said. “We can’t tax our way into making this work. We need to figure out different ways of generating revenue.”

Others said sales taxes are more regressive than property taxes, and said raising property taxes would allow citizens to vote on the matter.

“If the city chose to fund schools by property tax, the citizens would get a vote,” said Sign Faces co-owner Troy Crocker. “With sales taxes, citizens don’t get a direct vote.”

Hayes said the 1-cent sales tax increase would generate between $5.4 million-$5.6 million each year, which could be used to fund building projects and improve classroom offerings if Pelham forms its own school system.

“If you’ve got a good strong school system, it will drive economic growth, which benefits all business owners,” said Roberto Rodriguez, owner of the Trash Taxi company.