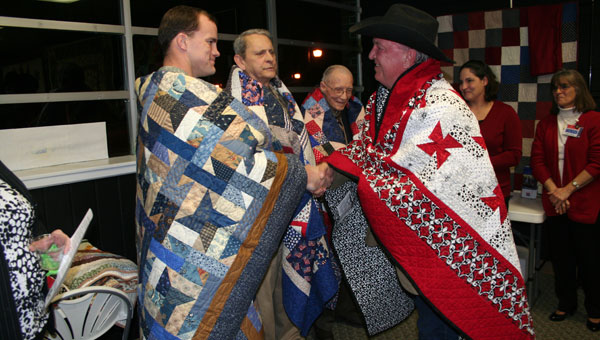 “The mission of Quilt of Valor Foundation (QOVF) is to cover all combat service members and veterans touched by war with comforting Quilts of Valor (QOV).”

The quilts are a tangible reminder of our nation’s thankfulness for their service, sacrifice and service.

These four men have served our nation in different ways and are representative of the 65,000 warriors who have been covered by QOVs since the project began in 2003 by Blue Star mom Catherine Roberts whose son Nathaniel was deployed to Iraq. Roberts began QOVF with her desire to see that returning warriors were welcomed home with love and gratitude with a physical show of affection, the wartime Quilt of Valor. The QOVF is now a national movement of quilters who sew with love and admiration a generous lap-size quilt for the active or veteran warrior.

Volunteers make the quilts sometimes specifically requested as Handley’s. Often sewers make quilts in memory of their loved ones for warriors as Walden and Hughes. Local quilters Sheila Gallups and Sarah Atchison made McCormick’s quilt.

To request a Quilt of Valor for your warrior, go to Qovf.org.

Storytime with Miss Jennie at the library