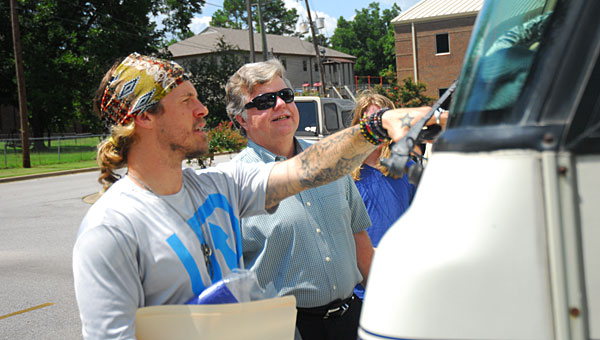 For Helena native Landon Cooper and his two running mates, the highway nicknamed “The Loneliest Road in America” lived up to its moniker and then some.

“It was 350 miles of nothing but desert road. From a psychological standpoint, that was the hardest part,” Cooper said of his time spent running Highway 50 in Nevada. “You had to worry about survival, water usage and preparing meals. It was quite a science project just to keep three people alive.”

Cooper’s 350-mile running trek on Highway 50 was a small portion of a more-than-3,000-mile journey across the United States from Feb. 14 to mid-July to raise money for the Sarcoma Foundation of America.

When Cooper and his running mates finished their journey from the Golden Gate Bridge to Ocean City, Md., they had raised more than $103,000 through their Miles 2 Give organization, which raised money for the Sarcoma Foundation of America.

“This tour brought so much needed awareness to sarcoma cancer, which really is the forgotten cancer,” Cooper said. “This is a small step to bring that needed attention to the fight against sarcoma.”

During the event, Hall read a proclamation honoring Cooper’s cross-country run and presented Cooper with a key to the city and a Helena city flag.

The key was given to Cooper by his longtime friend Brian Gaskins. The key originally belonged to Gaskins’ mother, who died from sarcoma cancer.

Cooper presented Hall with a jersey commemorating the run, which will be placed in the city’s trophy case, Hall said.

Following the presentations, Cooper gave the group a tour of the recreational vehicle he used while traversing the nation.

Although he recently finished the cross-country journey, Cooper said he is not resting for long. He and Hall are working to organize a Miles 2 Give 5k and half-marathon in Helena this fall, and Cooper is beginning to plan his 2014 Miles 2 Give run across another country.

“This was only our first country of many countries to come,” Cooper said. “We still have miles to go.”