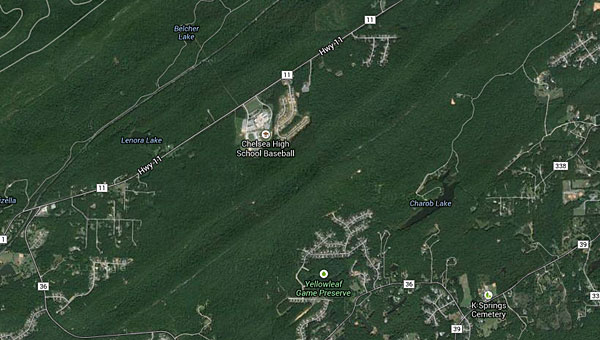 The Pelham City Council during its Sept. 9 meeting likely will give Chelsea permission to move forward with constructing a park on Pelham-owned property behind Chelsea High School.

“We did have a meeting with the city of Chelsea on Friday, to discuss what they are looking for, and we had a good discussion,” Hayes said. “We got some good info on what they are trying to do.”

Chelsea leaders are looking to build a multipurpose sports complex on more than 100 acres behind Chelsea High, although a portion of the property currently is in Pelham. The Chelsea City Council recently agreed to borrow $6 million from Regions Bank to fund the sports complex and other capital projects, such as a new community center.

“We have to get approval from Pelham before we can build the park. That was a condition set by the lender,” Chelsea Councilwoman Juanita Champion said on Aug. 20. “We actually own the land leading into the property, so we can go ahead and complete the road leading in.

“We have other projects we can move forward with, so we are not held up in any way,” Champion added. “We think (Pelham) will approve this, and will one day de-annex that property.”

Hayes said the Pelham council likely will vote on a resolution to allow Chelsea to move forward with the park on Sept. 9.

“There have been some obvious mistakes in communication (with Chelsea) that we have addressed and taken care of,” Hayes said, noting it was “next to impossible” to get the resolution on Pelham’s Aug. 19 council agenda.

“This is about us moving as fast as possible to do what is best for the kids in both communities,” Hayes said.