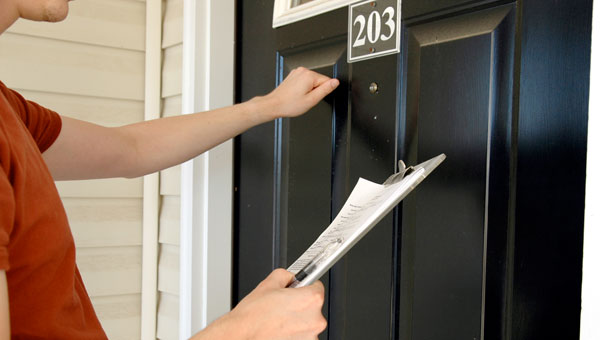 Alabaster residents have not been shy about reporting door-to-door salespeople since the city passed a new law in June laying out stricter guidelines on solicitors, according to police reports.

Since the new law was passed on June 17, the Alabaster Police Department has received 16 reports of solicitors in residential areas. The majority of the reports have come since mid-July, and most were “information only” reports, meaning no criminal charges were brought in the cases.

Alabaster Police Chief Curtis Rigney said Alabaster likely does not see more door-to-door solicitors than other area cities, but said residents are more likely to report solicitors to police as a result of the law.

“We are not different than anywhere else,” Rigney said. “People probably report it to us more because the law is in place.”

Through the law, every group or individual who solicits door-to-door in Alabaster must first obtain a permit from the city and keep it in their possession while soliciting.

The ordinance applies to every organization from Scouts to door-to-door salespeople.

For-profit organizations also are required to have current Alabaster business licenses to furnish upon request while soliciting. If a sale takes place, the buyer must be issued a receipt displaying the item received, the selling entity’s name, the price paid and the “fair-market value” for the item received.

Solicitors caught going door-to-door without the required documentation can be cited by the Alabaster Police Department.

Alabaster City Manager George Henry said Alabaster residents have a “heightened awareness” of the requirements placed on door-to-door solicitors by the law.

“Given some of the reports in other areas regarding burglaries, robberies, assaults, etc., from door-to-door sales people, I think residents are likely more aware and now have the tools to minimize their own risk by calling the (police),” Henry wrote in an email on Aug. 21. “We are trying to make sure everyone knows the parameters, both resident and solicitor.”

Pitt back in jail after allegedly impersonating a police officer