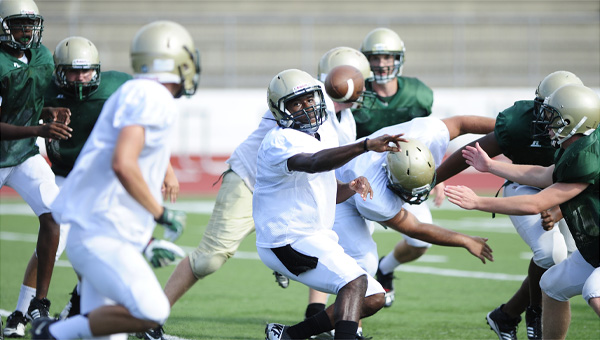 The Pelham Panthers will take on the Tuscaloosa County Wildcats in a road preseason matchup Aug. 23 (Reporter Photo/Jon Goering)

When describing the Pelham Panthers’ preseason matchup at Tuscaloosa County Aug. 23, the phrase “trial by fire” could be used.

The Panthers are a talented, but very young, football team that is seeking experience and hope the exhibition against the Wildcats will provide it.

“(It’s a) gauge of where we’re at,” head coach Brett Burnett said. “Tuscaloosa County is a solid opponent. We’ve got kids that need to play.”

One of the struggles Burnett said Pelham faces is trying to keep players that have game experience healthy going into the season. The team is waiting to hear a medical report on Austin Barclay, who strained a knee in the scrimmage game Aug. 16. Barclay is a projected starter at defensive end.

“It’s hard,” Burnett said. “You want to get out (of the preseason) as healthy as possible. We’re kind of dinged up. The kids that have played (before), we want to get them to game one.”

Burnett said the coaching staff will do everything to ensure depth — or lack thereof — doesn’t become an issue.

“Everybody will play,” he said. “ We’ve lost some kids. We really can’t afford to lose anyone else.”

With that in mind, Burnett said Pelham will still go full-throttle in the exhibition.

“We’re looking for weaknesses and areas of improvement,” he said. “Braxton Hoyett had a good fall camp. We’re anxious to see how he does. Several kids played well.”

Burnett also said the Panthers are relishing the opportunity to line up against someone other than themselves.

“Playing against opponents (we see) how everyone competes in a real game situation,” he said. “We’re looking forward (to it). We’ve been beating on each other.”

The Panthers will kick off at 7 p.m. at Wildcat Field, located at 12500 Wildcat Drive, in Northport.