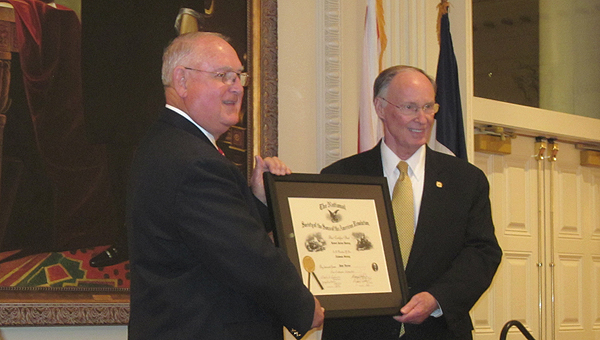 Marvin Vickers presented Gov. Robert Bentley with a certificate of membership into the Cahaba-Coosa Chapter of the Sons of the American Revolution Aug. 22. (Reporter Photo/Stephanie Brumfield)

MONTEVALLO – The Cahaba-Coosa Chapter of the Sons of the American Revolution celebrated its 10th anniversary Aug. 22 with a sit-down dinner and presentation at the American Village in Montevallo, where guest speaker Gov. Robert Bentley was one of about 140 in attendance.

During the program, Bentley was presented with a plaque acknowledging his acceptance into the Cahaba-Coosa Chapter of the SAR. He was also presented the Silver Award of Good Citizenship by founding chapter president Bobby Joe Seales.

“This honor that you gave to me tonight is very special,” Bentley said. “We can never forget how we got to this place…. America could not be free if it weren’t for our veterans.”

“You truly have helped build what I believe will be a place that ignites a fire in our country,” Walker said. “Thank you for what you have done to raise this place.”

Walker also recognized Bentley and compared him to George Washington in his refusal to accept a salary while in office.

“Governor, you followed in some fine footsteps,” he said.

The Cahaba-Coosa Chapter of the Sons of the American Revolution was chartered on Aug. 22, 2003. Their first banquet was held at the Pelham Civic Center.

By NEAL WAGNER / City Editor Members of the Alabaster Board of Education reflected on an “exciting” first week of... read more