Kingwood kicks off season with win 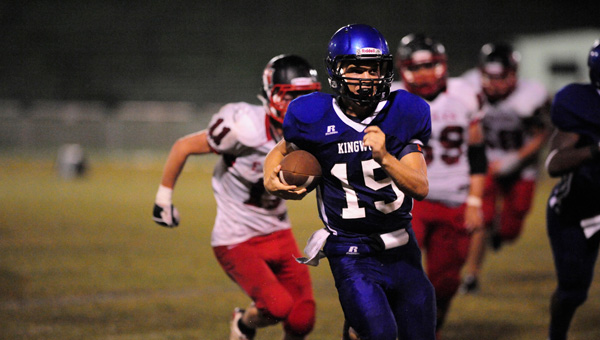 By JOSH ETHRIDGE / FOR THE REPORTER

Jackson opened the game with the ball and scored on a 10-play drive, eating up five minutes off the clock. The extra point was missed to give the Eagles a 6-0 lead.

On the kickoff, Jackson was able to regain possession as a result of a fumble by Kingwood. Eight plays later the Eagles scored their second touchdown on a 9-yard TD pass. Jackson attempted the two-point conversion, but failed to convert, making the score 12-0.

Kingwood’s woes continued during the next three drives, as they registered an interception, fumble and a blocked punt deep in their own territory. Jackson was able to capitalize by scoring twice to make it it 24-0 with 4:36 left in the first half.

The next drive, Kingwood scored on a 64-yard touchdown pass by Gavin Sumrall to Montez Haynes. The extra point was missed, making the score 24-6 with 4:10 left in the half.

Kingwood scored on its next drive with a 16-yard touchdown pass from Sumrall to C’Yontai Lewis, making it 24-14 at the half.

The Lions started the second half with a drive capped off by 25-yard touchdown pass to Montez Haynes. The extra point was missed making the score 24-20.

KCS cut the lead to two on a safety as a ball was snapped into the end zone on an attempted Jackson punt.

The Lions scored again on a 5-yard run by Sumrall. After the extra point, the Lions led 29-24.

Kingwood never looked back. They scored two more touchdowns to bring their total to 43 unanswered points.

“We got a wakeup call quick. We got behind 24-0, just got rattled,” said head coach Steve Birmingham. “They pulled it together, came back and shut them out.”

Montez Haynes finished the game with 7 catches for 125 yards and two touchdowns.

Kingwood goes on the road to face Hooper Academy Aug. 30.

Evangel receiver Mason Murphy hauls in a pass in a 61-0 win over Tabernacle Aug. 23. (Contributed/Cari Dean) By MARK... read more