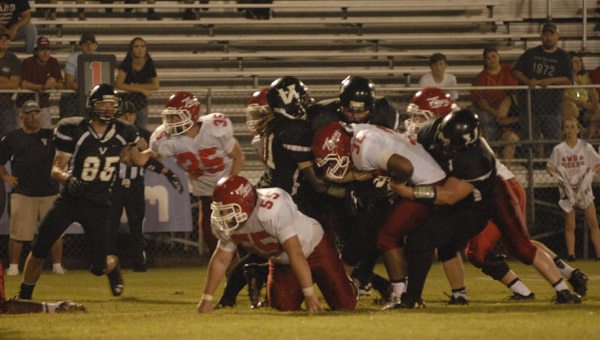 VINCENT — Jason Hill’s tenure as head coach at Vincent started off on a positive note as the Yellow Jackets took down West Blocton, 26-20, at home on Aug. 30.

The Jackets opened up the game by recovering a Tiger fumble on the sixth play of the game, but were forced to punt after a drive stalled out.

West Blocton got on the board first, as the Tigers used a five-play, 32-yard drive capped off by a Jason Vick rushing touchdown to take a 6-0 lead. The extra point was no good.

Vincent answered back on the very next drive, as it took three plays and a 34-yard touchdown run by Ryan Kelow to tie the game at 6-6 with 3:05 left in the first quarter. The extra point was no good, and the score remained tied.

West Blocton put together an impressive 10-play drive that ended on a failed fourth-down conversion attempt.

Vincent used another three play drive to score, this time when Michael Gilham hit Quartez Walker on a 76-pass for a touchdown. The Jackets attempted a two-point conversion, but it failed, leaving the score 12-6 with 8:46 to go in the second quarter.

West Blocton wasted no time answering, as the next drive took five plays as the Tigers scored on a 17-yard run by Richard Vick. The two-point attempt was no good, and the score was tied at 12 with 5:44 left in the half.

Vincent followed with a scoring drive of its own, this time using eight plays to go 60 yards, capped off by a Ryan Kelow touchdown run. The two-point conversion was no good, and the Yellow Jackets led 18-12 at the half.

The Jackets recovered a Tiger fumble on the opening drive of the second half, but were forced to punt on the ensuing drive.

Blocton took advantage, crafting a seven-play scoring drive, capped off by a Richard Vick touchdown run.  The two point try was successful, and the Tigers held a two point lead late in the third.

The turning point of the game came when Vincent was forced to punt on the following drive. A muff by the return team led to a fumble inside the Tiger 10 and was recovered by Vincent at the 5 yard line with 1:27 left in the third.

Following three plays that put the ball at the goal line, Gilham kept it to open up the fourth with a touchdown. The two-point try from Gilham to Jace Green was good, and the Yellow Jackets led, 26-20.

Green picked off a West Blocton pass the next drive, but Vincent was unable to turn it into points, turning the ball over on downs.

West Blocton had one last shot late in the fourth, as the Tigers took the ball from their own 6 yard line to the Vincent 30 on an 11-play drive that ended with a turnover on downs.

The Jackets then took a knee, and celebrated the 26-20 victory.

“I knew it was going to be a war,” Hill said. “I’m really proud of the way our guys fought. I’m really glad I’m here.”