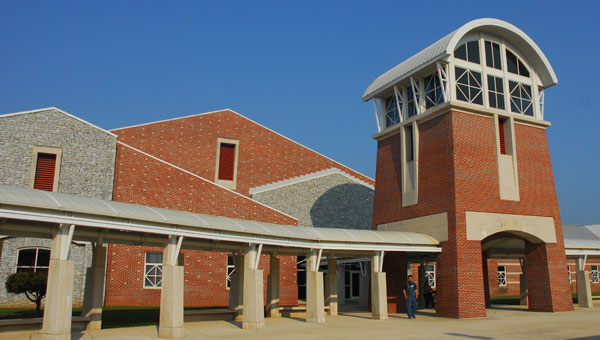 Meadow View Elementary School has benefited from its influx of federal funding over the past few years. (Reporter Photo/Neal Wagner)

Meadow View Elementary School’s status as a Title 1 school should not be viewed as a stigma, but rather as an opportunity to fund improvements ranging from new computers to parent programs, the school’s principal said on Sept. 10.

During the Alabaster school’s first Title 1 parent meeting in the MVES lunchroom, Principal Rachea Simms said the federal Title 1 status is given to schools with significant numbers of students on the free and reduced lunch program.

Simms said MVES has averaged about 40 percent of its students on the free and reduced lunch program over the past three years.

“Some may feel Title 1 is a stigma that you don’t want to be affiliated with,” Simms told the about 20 parents in attendance. “But I will tell you something about myself. I was a child who received free and reduced lunch growing up.”

The Title 1 status has brought an increase in federal funding to the school over the past few years, Simms said. MVES has used the federal funding to hire math coaches and tutors, and has purchased new computers and smartboards for the school’s classrooms and computer labs.

“Because we are a Title 1 school, that is an opportunity to reach many children who may not have access to that technology otherwise,” Simms said. “It’s exciting to be a part of a Title 1 school.”

This year, the school has also outfitted a parent room, which contains resources and computers for parents to use while helping their children with their classwork.

“This is what it is all about, enjoying our Title 1 purchases,” Simms said as she displayed a picture of students using educational programs in the school’s computer lab.

Title 1 dollars also fund a backpack program, in which parents are given free backpacks filled with items and activities designed to supplement their children’s classroom lessons.