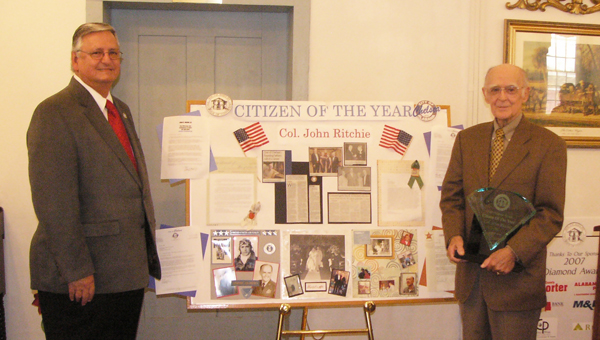 Chelsea mayor Earl Niven, left, with former Chelsea city council member Col. John Ritchie, right, after he was named Citizen of the Year by the South Shelby Chamber of Commerce in 2007. (Contributed)

CHELSEA – Col. John Ritchie, one of Chelsea’s founding fathers, died Sept. 15 at the age of 88.

Born in 1925, Ritchie served for 33 years in the United States Air Force before teaching math at Chelsea High School for 11 years. He is also considered one of the founding fathers of Chelsea, serving on its city council from the city’s incorporation until his retirement in 2007.

Chelsea city clerk Becky Landers wrote Ritchie’s nomination, saying that despite having been Chelsea’s city clerk for only a short time, Col. Ritchie made “such an impression on my life.”

“Everyone here in Chelsea cannot say enough good things about Col. Ritchie as he has spent countless hours of his time working towards the greater good and enrichment of lives for the citizens of Chelsea,” Landers wrote. “I can always count on him to be here for whatever meeting or need we have and there is always a big smile and a great attitude as well!”

In the nomination, Landers also gave credit to Ritchie for helping Chelsea become one of the fastest growing cities in South Shelby County through the many annexations Col. Ritchie helped Chelsea receive. Ritchie also served on the Planning Commission and Annexation Committee.

Joe Smith, a teacher at Chelsea High School who was one of Ritchie’s students back in the early 1980s, said Ritchie was a wonderful teacher, and all of the kids loved him.

“He was really wonderful man and gave his heart to teaching young kids and doing the right thing,” Smith said.

A memorial service honoring Ritchie will be Sept. 19 at 4 p.m. with visitation at 3 p.m. at Morningstar United Methodist Church, 11072 Highway 11, Chelsea.