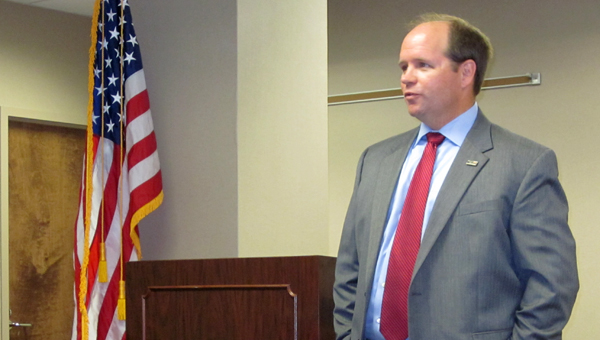 United Way of Central Alabama President and CEO Drew Langloh spoke at a campaign kickoff breakfast in Pelham Sept. 25, where it was announced that Shelby County’s fundraising goal is $2.66 million. (Reporter Photo/Stephanie Brumfield)

United Way Resource Development Manager John Martin said the $2.66 million fundraising goal for Shelby County is up about two percent from last year and was chosen based on a “pacesetter” campaign that ran this summer and raised more than $13 million for United Way of Central Alabama, which was raised jointly by all five participating counties. The total goal the Central Alabama division is about $37.9 million.

Drew Langloh, president and CEO of United Way of Central Alabama, spoke at the kickoff event and noted the goal is big, but so is the need.

As an example, Langloh mentioned 2-1-1, an information referral phone line operated by volunteers that helps connect those in need with appropriate agencies and services. In 2007, about 34,000 calls were made to the phone line statewide. At the end of 2009, more than 230,000 calls were made, and the number hasn’t gone back down, Langloh said.

“The other thing we saw during the recession was a huge spike up in people calling for basic needs – food, clothing, shelter, utility assistance, housing, basic stuff – and those calls are still coming and coming and coming with less and less resources to meet those needs,” he said.

The mission, then, for United Way agencies is to keep that story going by being advocates for the United Way campaign, said Langloh, by speaking about United Way at board meetings and connecting non-participating companies with the campaign. He described United Way as “a way to organize giving from the community” so agencies can focus on providing services.

Reed said some of his “most powerful United Way moments” are his site visits, when he gets to see what’s going on at United Way agencies.

“(We’ve set) a big goal, but Shelby County is a big-hearted county full of people who care and who are doing great work,” Reed said.

For a list of United Way partners and more information, visit Uwca.org.

The annual pumpkin patch will return to First Presbyterian Church of Alabaster on Sept. 29. (File) By NEAL WAGNER /... read more