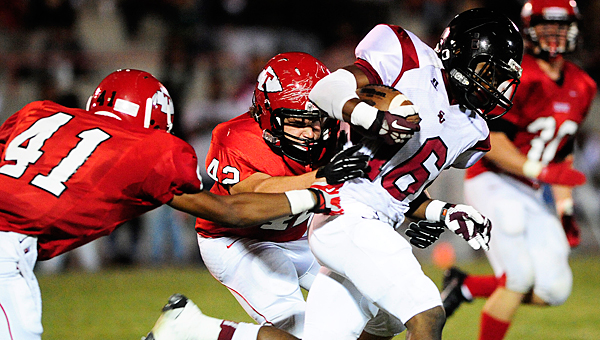 The Thompson Warriors were hoping to get their season back on track as they faced the undefeated Shades Valley Mounties, on Friday night.  Their efforts came up short as they suffered a 44-12 loss, dropping their record to 3-2 on the year.

Both teams started out slow, stalling out on their first drives of the game. The Mounties got on the board first with a 31-yard touchdown run by Keith Mixon. The extra point was missed, making the score 6-0 with 3:12 left in the first quarter.

Thompson pinned Shades Valley deep in its own territory after a long punt by David Buckelew.

Two plays later, Thompson defensive end Jake Rakestraw caught an interception on the three-yard line and ran into the end zone.  Shades Valley blocked the extra point as Thompson pulled even at 6-6.

Shades Valley quickly re-claimed the lead.  It took just five plays for them to score on a 63-yard touchdown pass. The extra point was successful, giving the Mounties a 13-6 lead.

Shades scored next on a Keith Mixon touchdown catch. The extra point extended the lead to 20-6.

With the clock running down in the half, the Warriors were able to reach the end zone on a 52-yard touchdown pass, but the play was annulled by a holding call. On the next play, quarterback Zach Brammer threw an interception, which resulted in a Mountie touchdown as Shades Valley carried a 27-6 lead into the half.

On the first play after the half, Keith Mixon scored his third touchdown of the game on a 72-yard run for a Shades Valley touchdown. The extra point extended the Mountie lead to 34-6.

Only a few plays later, Shades Valley scored on a fumble return for a touchdown, giving them a 35 point lead with 11:21 left in the third quarter.

Neither team scored again, as the Mounties were able to take home a 44-12 victory.

“Right now we are struggling in some areas, and until we fix those areas we are going to struggle,” said head coach Mike Montgomery. “The good news is they are all fixable.”

By DREW GRANTHUM/Sports Writer Anyone else having a hard time believing we’re already at the halfway point of football season?... read more