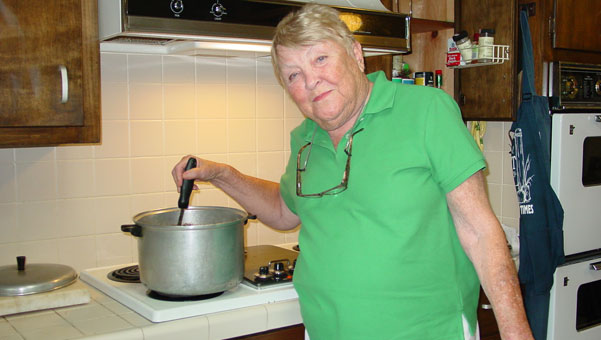 Laurie Orr Binion is a Montevallo girl and most folks know that she is a wonderful artist; that she loves animals, especially horses; and that she is an avid gardener; but it may not be known that she is also a great cook, from a long line of great cooks.

Laurie spent a happy childhood in Montevallo where her father, M. L. Orr, was Dean of Alabama College (University of Montevallo). Her mother was Annie Laurie, and siblings were Marie, Milton, and John. Laurie and her husband, Charlie, have four daughters: Lee, Patricia, Amy, and Lolly, who have given them eight grandchildren.

Laurie graduated from Montevallo High School, and gained her Bachelor of Art degree from the University of Alabama. For the next several years she worked in the advertising field before becoming a full-time mom.

As proof of the “great cook” reputation of her forebears, Laurie makes a batch of her Orr Sauce, and tells its interesting story.

“The recipe came from my father’s mother, and my mother, during the depression, thought she would make it to sell. She even had labels made, but never really got her project off the ground, so it’s just become a family recipe. We eat it on everything: peas, beans; we are addicted to it! Charlie even eats it on hamburgers.”

Laurie always makes enough of the sauce for her extended family, and she loves to share this recipe with friends.

8 Bell Peppers – Some can be hot peppers

Scald, peel, and chop the tomatoes, and chop the peppers & onions. Put in a big pot – Add all other ingredients and cook slowly all day until it seems done – Keep tasting. Do not let this burn….Stir occasionally and enjoy having your house smell this good! Put in jars and seal in a water bath canner.