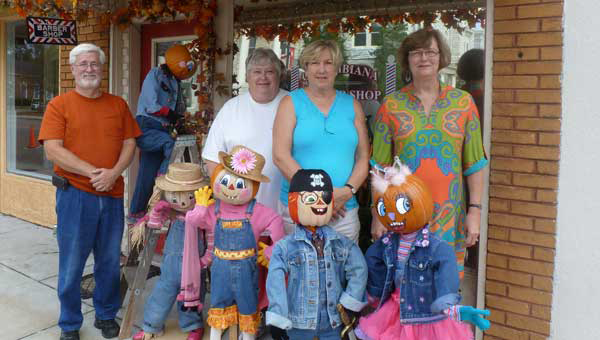 COLUMBIANA – It’s fall in Columbiana, and the Pumpkin Patch Kids are back. Leigh Ann Langley, owner of Columbiana Barber Shop, is the creator of the pumpkin kids that line Main Street in Columbiana, a visual treat for fall each year.

The financial investment has been costly to Langley over the years, especially when some of the pumpkin kids were stolen last year. This year, the Columbiana Merchants and Professional Association President Andrew Moore presented the idea to CMPA to help take up the financial banner when Langley was not able to fund the pumpkin kids on her own again. CMPA donated money for supplies, Moore made stands and Columbiana merchants purchased their own hand-make Pumpkin Patch Kids to display.

Several other fall events are planned in Columbiana in October.

The Columbiana Public Library is featuring a Halloween program “Strange Alabama” on Thursday, Oct. 24 at 6 p.m. at 50 Lester Street. Kyle and Beverly Crider will discuss fun and spooky locations around the state. Beverly, author of the book “Lost Birmingham”, is co-founder with Kyle of “Strange Alabama.” Free refreshments will be provided. The program is funded by a grant of the Alabama State Council of the Arts.

Pelham would allow new types of signs in the city if the council agrees to modify the Pelham sign ordinance... read more