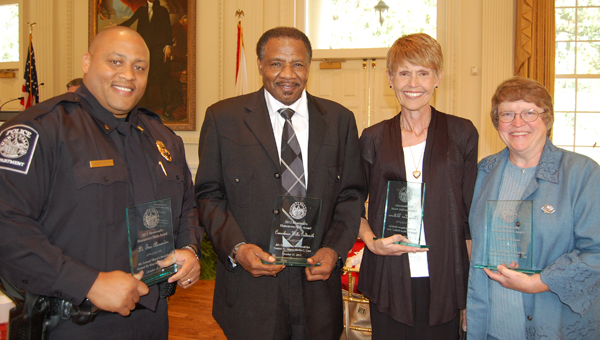 Cost said she felt honored to continue the tradition started by former Mayor Ben McCrory, and she spoke about each award winner before handing over the microphone to the presenters.

About Shivers, Cost said she “provided a haven and learning oasis for children through the Boys and Girls Club,” which opened in June 2009.

“It’s very odd to me to be up here as a hometown hero because so many of you have done so much for this city,” Shivers said during her keynote address.

Alexander was introduced by Montevallo police chief Jeremy Littleton, who noted that Alexander grew up in a single-parent household in the projects and gradually worked his way up the ladder, starting law enforcement part-time in 1996 and being promoted to lieutenant in 2013.

“He has always found a way to help the youth of this city,” Littleton said.

McCrory introduced Goldsmith, who has served on the city council since 1985. McCrory said Goldsmith’s 28 years of service in Montevallo is especially unique because he didn’t grow up in Montevallo.

“Willie chose to make Montevallo his home, and we are all so much better for that choice,” McCrory said.

About Williams, Cost said she is “nothing short of an icon” in the city of Montevallo is “the backbone of what makes Montevallo special.”

“Mary Lou has touched all of us in some way,” Kirby said. “Mary Lou loves our city, and our city loves you.”

By NEAL WAGNER / City Editor Two Brent residents and a West Blocton resident are being held in the Shelby... read more