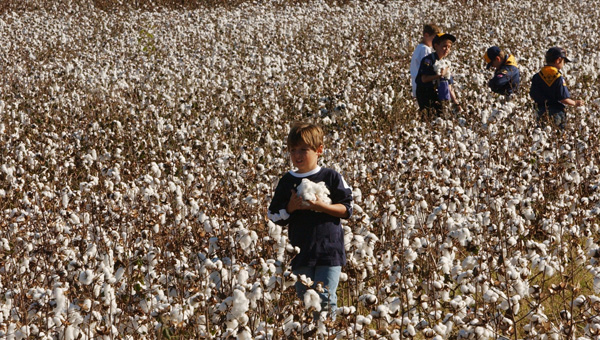 Old Baker Farm in Harpersville opens to the public and offers pumpkin and cotton picking during the fall. (Contributed)

HARPERSVILLE – About 20 years ago, fourth-generation cotton farmer Jerry Baker woke his wife, Pam, at about 2 a.m. in the morning and said, “We’re going to grow pumpkins.” And they’ve been doing it ever since.

The Bakers, who own Old Baker Farm in Harpersville, have been inviting the public to their farm since the late 1990s and are known for their pumpkins, cotton and Christmas trees. The farm is open seven days a week with varying hours and admission costing $10 per person.

The first fall they began the pumpkin experiment, in 1998, they had 850 school-age children visit their farm. After much begging, they opened their farm to the public just a few years later and have grown to hosting 8,000 children during the fall in a span of about six weeks.

“(Growing pumpkins) took a lot of homework,” Pam Baker said. “This is not pumpkin country. We’ve learned through the years which ones grow the best.”

In addition to choosing pumpkins from the pumpkin patch and picking cotton from the fields, both of which are included in the price of admission, the Bakers also open their barn and farm animals for the public to “pet and enjoy.”

“We have two lambs that were born less than a week ago,” Baker said.

Besides visiting, the public has also gotten involved in other ways.

Harpersville United Methodist Church hosts an annual pumpkin-hauling fundraiser during the month of October, when they bring golf carts to the farm, take the pumpkins families pick off of their hands and haul the pumpkins to the farm exit, she said.

“They don’t ask for donations, but people are very generous usually,” she said.

Other highlights include a corn maze, hay maze, hay mountain, hayrides through the Bakers’ 100-acre forest and barbecue cooked on site.

At the farm’s Cotton Pickin’ celebration Oct. 26-27, the farm will also serve host to about 40 vendors ranging from arts and crafts to kettle corn and boiled peanuts.

Admission is $10 per person, with kids age 2 and younger admitted free. Only cash or checks are accepted.

For more information about upcoming events, call 672-7209 or visit Oldbakerfarm.com.