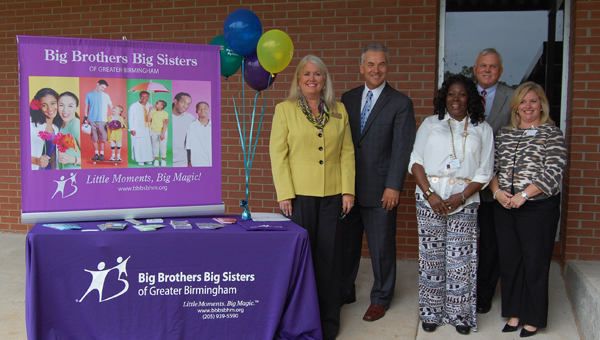 “I was a Little Brother,” Vest said. “If it weren’t for Big Brothers Big Sisters, I wouldn’t be here.”

Vest was matched with his own Big Brother, Mike Griffin, 33 years ago when his mother felt he might be going down the wrong path. Vest, whose father left when he was five years old, said his brother had gotten caught in the 70s drug scene, and his mother was determined for that not to happen to him, too.

“Thirty three years later, I’m bringing this to Shelby County because I know what it can do. It changed my life,” said Vest, who named his son, Griffin, after his Big Brother.

The pilot programs in Shelby County will begin at Montevallo Elementary and Vincent Elementary, said Sue Johnson, CEO of Big Brothers Big Sisters of Greater Birmingham, though the program will expand to other schools as funding becomes available.

Shelby County Schools Superintendent Randy Fuller also spoke at the event, and he said the key to the district’s success is the partnerships it has with the community.

More than 900 students are being served in the greater Birmingham currently, and Johnson said she expects the organization to serve 200 students in Shelby County within the next three years.

Seven matches have been made so far at Montevallo Elementary, and more will be made in the coming week in both Montevallo and Vincent with “Bigs” participating from Montevallo High School, the University of Montevallo, Vincent High School and EBSCO Industries, according to Big Brothers Big Sisters director of public relations Jessica Whatley.

Vest said he had a goal as a commissioner to do something for the community, and he would continue to bright light to the organization that did so much for him.

“I’m a product and a proud product,” Vest said. “I will build my grave campaigning for Big Brothers Big Sisters.”