Another resident killed in Wilton fire 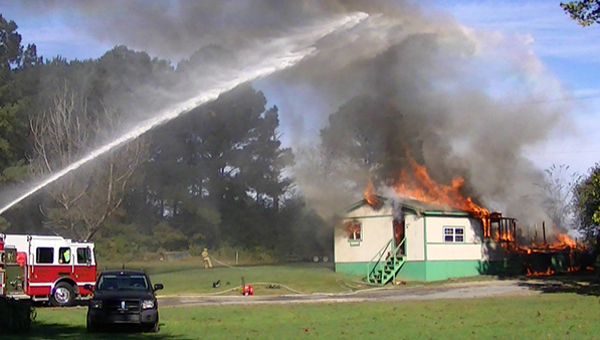 A residence on Gunlock Road in Wilton caught fire in the early morning hours of Oct. 18, killing two. (Contributed)

Kandace Devon Lee, 40, died after being transported to a local hospital after her residence caught fire, according to a Shelby County Sheriff’s Office press release. Her 9-year-old daughter, Leah Elizabeth Lee, was pronounced dead at the scene.

The Shelby County Sheriff’s Office, along with the Brierfield, Dry Valley, West Shelby, Pea Ridge and Montevallo fire departments, responded to the residential structure fire in the 700 block of Gunlock Road in Wilton at approximately 4:10 a.m. When sheriff’s deputies arrived, the residence was “completely involved with fire and smoke,” according to the press release.

Investigators with the Shelby County Sheriff’s Office and the Alabama State Fire Marshal’s Office said it would be days or weeks before a final determination of the cause of the fire could be made, but the fire appears to be the result of an accident and not a crime, according to the press release.

Sheriff Chris Curry sends his sympathy and condolences to the family and friends of Kandace and Beth Lee.

“It is when something as tragic as this happens that we all struggle to understand it,” Curry said. “I am truly sorry for your loss.”

Anyone with information about the fire should contact the Shelby County Sheriff’s Office directly at 669-4181, through the Secret Witness line at 669-9116 or through the website Shelbyso.com. Click “Report Criminal Activity” and choose the “General Information” category.

Structure fire kills one, injures another in Wilton

FROM STAFF REPORTS WILTON – One person was killed in the early morning hours of Oct. 18 after a residence... read more