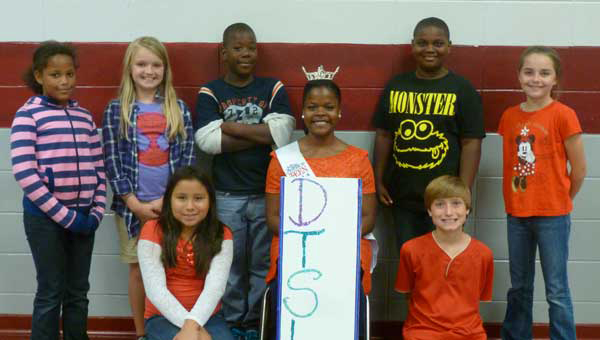 Her platform is DTSLA – Don’t Take Someone’s Life Away, A Fight against Bullying. Dugans said she has been bullied and two of her friends to suicide after being bullied so much that they lost all hope. Recently, Dugans spoke to more than 100 fourth and fifth grade students at Elvin Hill Elementary School.

“I was bullied in sixth grade after I changed schools,” Dugans said. “I was bullied physically and emotionally so much that I did not want to go to school. My mother told me not to let anyone stop me. I learned that I had to change how I dealt with bullies. I prayed for the bully. The situation did not change. I did.

“I decided to voice my opinion and not be a doormat,” she added. “I am part of a club at my school, SAAD – Students against Destructive Decisions, whose purpose is to stomp out bullying. I stayed strong and believed that all things are possible to those who believed in God. I am trying to make a difference.”

Dugans is a sophomore at Springville High School, where she is an honor student, cheerleader, competitive dancer and basketball team player.

“I have benefited so much from the pageant system,” Dugans said. “I have so much more confidence and self-esteem. I feel I can make a difference through my platform to help kids like me who are bullied. I was so shy and used to hide behind my mother’s leg. As a little girl I went to pageants and wanted to be wanted to be like the contestants.”

“Bullying is being mean to someone,” Dugans said. “It is unwanted mean behavior that is repeated. Bullying can hurt people’s lives and cause you to lose friends. If you are bullied, talk to your family, talk to your teacher and get help.”

Dugans is available to talk to schools, churches and clubs about her bullying platform. Call Director Pam Oliver at Pam5566@aol.com.

By Cassandra Mickens / Associate Editor HOOVER – The Hoover Board of Education spent more than an hour at its... read more