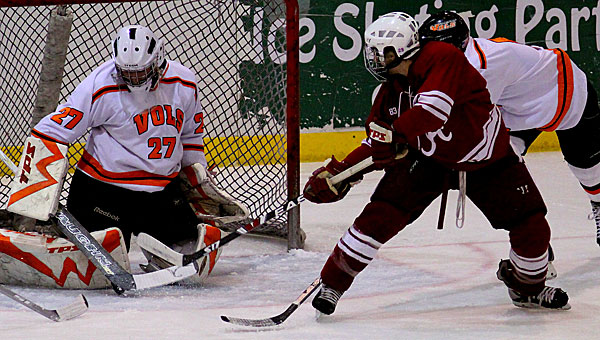 The South Eastern Collegiate Hockey Conference tournament will return to the Pelham Civic Complex and Ice Arena for 2014. (File)

The Pelham Civic Complex and Ice Arena will see multiple upgrade and renovation projects over the next year in preparation for a pair of major upcoming events.

Included in the city’s 2014 fiscal year budget, which the Pelham City Council passed during its Nov. 4 meeting, is about $5.8 million in capital improvement projects throughout the city.

The Pelham Civic Complex’s capital improvement budget included $383,160 in upgrades ranging from a new pizza oven to an expansion of the practice ice arena.

Major projects outlined in the budget included a $230,000 plan to expand the practice ice arena and add new bleachers to bring the arena’s capacity up to the requirements of a pair of events scheduled at the complex in 2014.

The Civic Complex is scheduled to host the South Eastern Collegiate Hockey Conference tournament and the Southeast Great Lakes Skating competition, both of which will be held in February 2014.

Next year will mark the fourth time the Civic Complex has hosted the SECHC tournament. Pelham also hosted the tournament from 2009-2011.

During a recent city budget hearing, Civic Complex Director Danny Tate said the expansion and new bleachers will ensure the building is able to accommodate spectators at the two events.

“With the revenue that is expected from those special events, that will cover the costs of these upgrades,” City Council President Rick Hayes said. “The money we are putting into those upgrades will come back and pay for itself.”

Also included in the budget was about $61,000 to restripe and seal coat the Civic Complex and Oak Mountain Amphitheatre parking lots. The restriping and seal coat project also is receiving funding from the Amphitheatre.