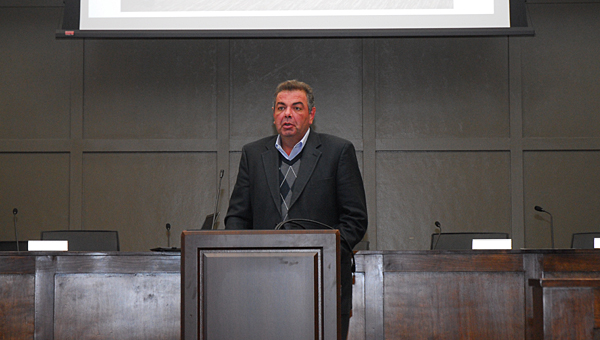 Several retail, corporate and hotel developments are in the works in Alabaster, some of which have nearly been finalized, city leaders have said over the past few days.

During a Nov. 12 City Council work session and a Nov. 14 meeting between city officials and local business owners, Alabaster leaders and business people released details pending in the city’s future.

“Our location and size is so attractive to so many businesses,” Mayor Marty Handlon said during the Nov. 14 meeting.

Costel Hofman, general manager of Candlewood Suites in the Propst Promenade, said his company is looking at possibly expanding its footprint in the shopping center.

“Right now, we are trying to get (our current hotel) to full capacity,” Hofman said after the meeting. “There is a misconception that we are exclusively an extended-stay hotel, but more than half of our business is six days or less.”

Hofman said the owners of Candlewood Suites are considering expanding the hotel to adjacent property, and could even construct a conference center.

“We need our (occupancy) numbers to be a little higher,” Hofman said. “That’s why we are trying to clear up any misconceptions.”

Candlewood Suites is not the only hotel considering a future in Alabaster, according to City Manager George Henry.

Although he said he was not yet able to identify company names during the Nov 12 work session, Henry said the city has seen interest from multiple hotels.

“It looks like we have got some legitimate plans for hotels coming to the Promenade,” Henry said.

Henry also said the city is ready to finalize the first tenant in the Dunn Corporate Park, which is on the east side of Interstate 65 just north of the Shelby County Airport.

Henry said the company’s name will not be released until the deal is finalized, but said the company is looking to move to Alabaster from its current location in Birmingham.

State Sen. Cam Ward, R-Alabaster, who also is the chairman of the city’s Economic Development Board, is working with city leaders to attract tenants to the proposed Alabaster Exchange shopping center. If built, the shopping center would be off U.S. 31 just south of JC Penny and Steak ‘n Shake.

“We are getting really close on that one,” Henry said of the Alabaster Exchange.

A volunteer helps a rider try on a new helmet at the Greystone YMCA Bike Rodeo Nov. 9. (Contributed) By... read more