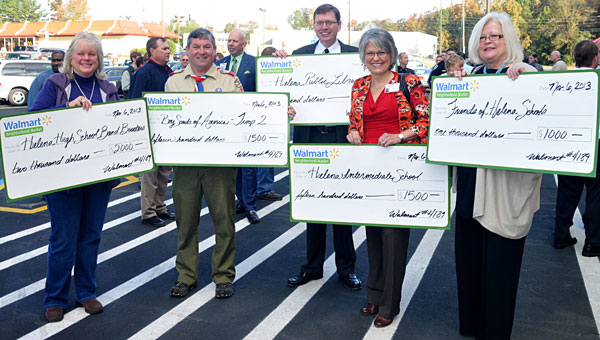 Vietnam veterans were awarded Quilts of Honor at the World Peace Luncheon at the BJCC East Ballroom. Blue Star Salute Foundation President Mel Shinholster holds his Veteran of the Year award and his Quilt for Valor, and Ranger Ed Carey holds his Quilt for Valor. (contributed)

As the official time for the opening ceremony for the Walmart Neighborhood Market #4189 in Helena approached, the crowd consisting of both Walmart employees and shoppers grew to an estimated 100 plus.

Free Community Coffee and Bryan hot dogs were available to the crowd, which experienced both a brief shower and a rainbow while waiting.

“We’ve been anticipating this for a couple of years,” Mayor Mark Hall said. “This will be a catalyst to fill up the rest of this shopping center and a spur to other retail development nearby.”

“Our building inspectors and fire chief helped expedite this opening and the city was proud to do that. This is a milestone for Helena; we have been lacking that retail base, so this will truly make a difference.”

John Tow, Alabama Regional General Manager, thanked the store team, saying, “Sam Walton used to say, ‘Walmart is just an ordinary group of people doing extraordinary things.’ I can tell you that Sam would have been proud of this team.”

John Guice, Market Manager from Market #11 said, “We appreciate the long hours these associates have put in. The store management team from Store #11 is all on hand and has been instrumental in helping train new employees. We’re going to do everything we can to contribute to this community.”

Armstrong led managers and associates in the “Walmart Cheer and then cut the ribbon.

As the doors opened to shoppers, freshly cut slices of cake were passed out to customers, along with soft drinks and bottled water. Mr. Oreo cruised the aisles and happy to provide hugs.

Twins’ drawings to be featured in calendar

The drawings of Sam, left, and Jake Knight will both appear in the first Helena Arts Council 2014 Calendar, which... read more