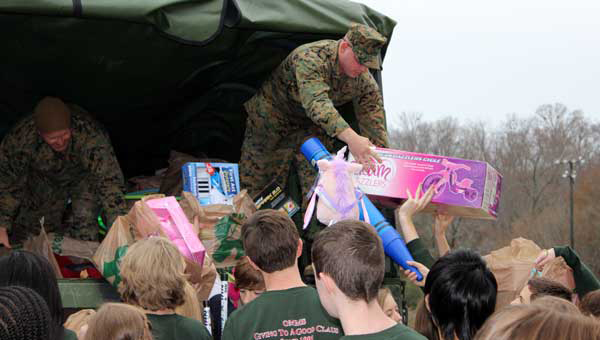 NORTH SHELBY – Each year, Oak Mountain Middle School students set a goal to raise $20,000 for the local Toys for Tots campaign. And each year they not only reach that goal, but they exceed it, guaranteeing that many deserving children in Central Alabama will have presents under their Christmas trees.

This year the students raised $28,605. The school has raised nearly $300,000 since it first began its annual Toys for Tots campaign in 1999. The school holds the national record for the largest school donation for Toys for Tots with $42,000 raised in 2006.

The Oak Mountain Toys for Tots project is lead by the National Junior Honor Society. On Monday, Dec. 9, the National Junior Honor Society students spent the money on new toys at the Toys-R-Us in Hoover. The United States Marine Corps, which sponsors Toys for Tots, attended the school’s Christmas Assembly that same afternoon at 2 p.m. to pick up the toys.